By Jo Comerford
Posted August 3, 2020
In The People's Blog, Updates from Jo
Timely update about the Northampton roundabout2020-08-032021-03-01https://senatorjocomerford.org/wp-content/uploads/2019/02/senator-jo-comerford-remake-centered-02.pngJo Comerfordhttps://senatorjocomerford.org/wp-content/uploads/2020/07/update-regarding-the-northampton-roundabout.png200px200px
0

We’re writing again in partnership with Representative Sabadosa and Congressman McGovern, to share a third timely update on the archeological site in Northampton and the construction of the roundabout.***

Our offices have continued to engage deeply.

Here’s what we’ve done since we last wrote to you on July 9:

Here’s what we know at this moment:

Our teams remain vigilant. We are committed to ensuring that native voices are centered in whatever decision is made.

Thank you for your engagement and concern.

***For reference, text of the previous emails we have sent to constituents are here and here. 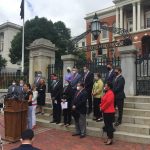 Our sprint inside a marathonNewsletters, The People's Blog, Updates from Jo