Tuesday was a whirlwind. There’s really no other word.

I came to think on Wednesday morning (Jan. 6), mindful that our last day of the previous session (Tuesday, Jan. 5) stretched until 4:30 a.m., that such a session — intensely shaped by COVID, an economic crisis, federal turmoil, and an unmistakable cry for racial justice — couldn’t have ended any other way.

There was a mountain of critical people’s business to be accomplished and we certainly weren’t going to let a little lost sleep come between us and what needed to be done.

So what happened on the last day of session? In the following paragraphs, I’m attempting to capture just a sliver of what was considered and passed Tuesday — legislation which now is on the Governor’s desk for what I hope is his signature.

Of course there’s more (like the passage of many local pieces of legislation for communities like Northampton and Erving).

I’ll certainly be back in touch in the days ahead with more information.

The “Transportation Bond” bill authorizes the state to borrow $16.5 billion to pay for transportation and infrastructure projects around the state. Projects identified in the bill are not guaranteed to be funded, but being included is a first solid step to becoming eligible for funding. In addition to the projects listed below, the bill also directed RTAs to set up a reduced fare program for low-income residents, and increased the fee for Uber and Lyft rides, which goes in part to fund local transportation needs. That fee section included a provision I worked on with Rep. Natalie Blais, which exempts towns receiving less than $25,000 in fees from Uber and Lyft rides originating in their towns from having to report on the amounts received.

I also worked with colleagues to give rail transit a big boost in the bill. The bill included funds to make the pilot Valley Flyer rail line, which connects Greenfield to Northampton and continues down to Holyoke and Springfield, a permanent commuter rail service. There are also funds for planning and other steps for an eventual Route 2 passenger rail line between Fitchburg to Greenfield and on to North Adams. Planning for that study is already underway.

I also successfully sought bond authorizations for these local projects which were included in the final bill:

This is a much-anticipated economic development bond bill, which is as focused on equity as it is on COVID-19 relief for small businesses and workers, and also contains some crucial pieces of legislation within it. You can find a summary of the spending and policy included in this bill here.

When this bill came before the Senate in July, I was able to secure funding authorizations for local priorities and I was thrilled to see so many of those authorizations retained in the final compromise legislation. These funding authorizations do not mean that money will immediately flow to these local projects. However they do mean that the state is authorized to sell bonds (debt) in order to fund the following projects, and you can bet I’ll be linking arms with local officials in the months and years to come in hopes of realizing some or all of these bonding authorizations, including an authorization for $500,000 for Greenfield Community College’s planning and development of a health care training facility (building on Rep. Paul Mark’s $500,000 authorization in the House bill for a $1 million pot of potential funding) and $1 million for the University of Amherst’s Water and Energy Technology (WET) Center. The WET lab is an award-winning, innovative hub for water research — and the only such center on the east coast north of Georgia tackling PFAS contamination and COVID-19-related detection through water.

I filed legislation at the beginning of the session, in partnership with Rep. Paul Schmid and the Northeast Organic Farmers Association, to create a healthy soil program in the Commonwealth after learning about the win-win-win benefits of healthy soils: they’re a win for our farmers as healthy soils produce more crops and increase earnings, a win for our environment as healthy soils sequester more carbon dioxide that would otherwise be in our atmosphere, and a win for food security as more people in the Commonwealth gain access to fresh, local produce. When the Senate considered the economic development bond bill in July, I filed this healthy soils bill as an amendment and I am thrilled that it was included in the final economic development legislation.

Resolve Providing for the creation of a special commission relative to the seal and motto of the Commonwealth (S.2848)

This bill sets up a commission to review the state’s official seal, which also appears on the state flag. This bill has been before the Legislature for decades, originally filed by Representative Byron Rushing. I was proud to co-sponsor and fight for this legislation, filed in the Senate by Senator Jason Lewis and in the House by Representatives Nika Elugardo and Lindsay Sabadosa. It remains a top priority for me and my team because it’s a top priority for Native leaders and 20 of 24 Hampshire, Franklin, Worcester district communities which passed resolutions in support. This is also personal for me as some of my very earliest organizing in western Massachusetts was around this bill, working with Native leaders and the Peace Pagoda on statewide walks in support.

This bill came before the Joint Committee on Public Health and I was delighted to work with colleagues to vote it favorably out of committee. The bill’s namesake, Laura Levis, walked to the Somerville Hospital on Sept. 16, 2016, after she started experiencing an asthma attack. Tragically, she died outside a locked emergency room door. The bill requires the Department of Public Health to implement regulations on emergency room signs, lighting, doorbells or panic buttons, and video surveillance monitoring of any visible hospital entrances that lock at night.

This bill grapples with sexual assault on college campuses by creating a task force to develop a model sexual assault climate survey for higher education campuses in the Commonwealth. It also mandates that all higher education institutions biennially implement either the model survey or an internally developed survey that has been approved by the Commissioner of Higher Education. The summary of results must also be posted online on the university or college’s website as well as the website for the Department of Higher Education. I was proud to co-sponsor this legislation and to vote yes on its favorable passage out of the Joint Committee on Higher Education.

An Act relative to agricultural commission input on board of health regulations (S.2446)

This bill, filed by Senator Adam Hinds and Rep. Natalie Blais was a recommendation of the Massachusetts Local Food Action Plan. This bill requires that in municipalities with a municipal agricultural commission, the ag commission be provided an opportunity to comment on new board of health regulations that impact farmers markets, farmers, horticulture or agriculture. This will help facilitate the sale of locally grown food throughout the 351 municipalities, each with their own health regulations.

An Act to reduce racial inequities in maternal health (H.4818)

This bill establishes a special legislative commission to examine and make recommendations to reduce or eliminate racial inequities in maternal mortality and severe maternal morbidity.  The commission would look at access to prenatal and postpartum care, quality of care, affordability of and access to birthing centers and medical homes, the cultural competency and diversity of maternal health care providers and other factors that contribute racial disparities in maternal health. The Commission would consist of experts in the field of maternal health, elected officials, members of racial justice organizations, healthcare providers, those who have lost an immediate family member to maternal death, and others. This legislation came before the Public Health Committee and I was proud to work with colleagues to vote it favorably out of committee. I was a proud cosponsor of this bill.

The House and the Senate also collaborated to override 39 more of the Governor’s FY21 budget spending vetoes, including funding for community colleges, state universities and english language learning in K-12 schools.

The bill requires that the public be notified when untreated sewage overflows into a waterway.

Billions of gallons of sewage flow into Massachusetts rivers each year through outdated water systems called combined sewer overflows, or CSOs. The sewage contaminates waterways with pathogens like fecal coliform, sometimes for days. Under the bill, sewage system operators must issue a public advisory within two hours of a sewage discharge and every eight hours thereafter until the discharge has ended. I was a proud cosponsor of this bill.

This legislation balances the relationship between brewers and their distributor, jeopardizing potential growth by allowing a brewery that produces less than 250,000 barrels a year to end their relationship with a distributor with 30-day notice and other certain protections. If a distribution contract is terminated, the brewery would be responsible for fairly compensating the wholesaler the fair market value of the distribution rights in addition to other costs for inventory and marketing investments. The legislation calls for both parties to engage in an expedited arbitration process to resolve such issues.

The bill  is the first major update to credit union law since 1909, and it streamlines annual meeting processes; improves internal Board communications; inserts flexibility for optional credit committees and streamlines committee composition. It also modernizes incorporation provisions. All of these changes will allow credit unions to better serve Massachusetts residents. 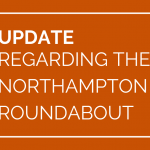 An update on the Northampton roundabout projectThe People's Blog, Updates from Jo