I gave the following remarks on Friday, September 20 at the Annual COSA breakfast.

It’s such an honor to be here with you today — now eight months into my first State Senate term.

As I reflected on today, I looked back at what Congressman Jim McGovern said when he spoke at this breakfast in 2017. Jim lamented — rightfully — about the lack of collaboration in Washington D.C., noting that partisan politics were standing in the way of getting results.

In the State Senate where I now serve the 24 cities and towns of the Hampshire, Franklin, Worcester district, we don’t worry as much about partisan gridlock. And yet here too, the legislature is not as productive as it could be. As it must be. Housing prices skyrocket as affordable housing legislation stalls, transportation solutions are being “studied” instead of being “built,” and the rates paid to human service providers are stuck in the early 2000s.

Lately I’ve thought of my time in the Senate as akin to taking up residence in the busiest crossroads I can imagine. In moments when the volume of work outpaces my capacity to triage, I return to a strategy that has helped me get results in all of the other jobs I’ve held: organize and collaborate. And as I’ve retrenched in this strategy, I’ve run into a lot of the people in this room.

Let me take you back to January 4. I’d only been a State Senator for two days, but the deadline to file bills was fast approaching. By January 18, I’d need to have all of my legislation for the two-year session filed. What legislation, you ask? I was asking myself the same question.

That’s when my team and I met with Veteran’s Service Officer and COSA member Steve Connor. Steve raised an issue that I knew nothing about: Massachusetts is not reimbursing veteran’s service officers and municipalities in a timely manner for their critical work on behalf of veterans. And this is causing towns to consider withdrawing funds for these critical services. We began to collaborate. And I’m thrilled to say that I filed S.2154 – An Act providing for timely reimbursement of cities and towns for veterans’ benefits which has been reported out of committee favorably, largely thanks to Steve who drove five hours to Boston and back to testify.

After my meeting with Steve, the emails started rolling in. One from Pamela Schwartz, at the Western Mass Network to End Homelessness, connecting me to a group of advocates looking for a way to get agencies to share critical information as they work together to combat homelessness. The result: S.31 – An Act providing for coordinated data and assistance to address family homelessness. As soon as the bill was filed, Pamela let loose on my legislative colleagues securing a whopping 21 co-sponsors for this legislation.

And then an email from Cooley Dickinson. Cooley Dickinson serves patients in areas that are “underserved” by medical professionals, according to the state’s definition, but the hospital itself is not located in an underserved area. This was stopping them from accessing loan forgiveness programs available to primary care providers who work in underserved areas — an incentive that could help go the distance to address nurse and primary care shortages in our region. Enter S.1221 – An Act expanding care for medically underserved areas of the commonwealth. The hearing for this bill is coming up on October 8, and if Jeff Harness isn’t here right now it’s because he’s writing his testimony.

Bottom line: I could not, and would not, have filed the legislation that I filed by January 18, just 16 days into my first Senate term, without you in this room.

Without you, our team’s legislation would not be nearly as relevant and useful to our region.

And without you, these bills would not have gained the momentum they have.

This is how we win. In western Mass, we don’t just vote on election day every couple of years and call it a day. We show up. You all show up. Tirelessly. On the frontlines of care for the people of this region.

I often tell my team that the squeaky wheel gets the grease. Well, you all have helped the Hampshire, Franklin, Worcester Senate office be one of the squeakiest wheels on Beacon Hill.

Together we’ve taken action to address the so-called cliff effect which forces people to remain in poverty lest they lose vital services.

And fought for fentanyl testing strips which can help save the lives of people snared in the opioid crisis.

And more. So much more.

I could spend the rest of my time going down the list of COSA members who have reached out to collaborate, organize, nudge, and shove.

But instead let me pause here to say thank you.

I come from the social service sector having arriving in our region with an MSW and then working regionally, statewide, and nationally to pound on government to make it work in the best interest of everyone.

I know government only works if people like you make it work. It’s the tried and true reality of our day. The only thing stronger than big money in politics, bi-partisan gridlock, and Beacon Hill squabbling is you. All of us working in concert thanks to powerful networks like COSA.

And now I’d like to quickly forecast just some of the work ahead:

The legislature is cracking open the Chapter 70 formula to look at what it actually costs to educate special education students, or students in rural areas, or to pay for teacher health care costs and more.

This is a generational opportunity to seize the civil right promise of our time and fully fund our schools so that they propel all our children forward toward their dreams. I’ve dug in here mightily thanks to the strong and steadfast partnership of COSA member, the Collaborative for Education Services.

CES stepped up with grit and grace to help organize a forum where the same people who are rewriting the Chapter 70 formula could hear directly from our region’s teachers, school administrators, and guardians and parents. But CES did not stop there. Every single time I’ve needed data to argue our case for more education funding, CES has worked with the schools in our district to present a sharp argument to the Education Committee, to Senate leadership, to the Department of Elementary and Secondary Education.

And I’m delighted to say that the Student Opportunity Act was released yesterday, promising a $1.5 bn investment of new public funds for our public schools with an eye toward equity and closing the opportunity gap. On the whole, this is a solid bill, but there’s work we’ll need to do together to help make it a great bill.

As Senate Chair of the Joint Committee on public health, I’m fortunate to have a hand in some of the health related legislation the Senate will take up in the second half of this session. As I’ve worked through the 356 bills that were sent to the Public Health Committee, I’ve sent my Senate colleagues who head up the Health Care financing committee the legislation that they need from my committee to craft a comprehensive health care reform bill. I’ve pushed forward legislation that recognizes the social determinants of health, while keeping an eye out for how we can move Massachusetts towards a single payer health care system..

The Speaker of the House has indicated that the House will look at revenue proposals in the second part of the session and the Senate President has formed a revenue working group to examine the Massachusetts tax code and understand how it might be reformed.

In Massachusetts, we don’t have a spending problem: we have a revenue problem.

Over the last decades, through policy, we’ve systematically starved our budget, robbing it currently of $4.15 bn annually through corporate and individual tax cuts that benefit the wealthiest among us.

I was talking to Representative Aaron Vega recently — telling him that I think the phrase ‘budget surplus’ should be outlawed and he shared an analogy that I told him I’d have to borrow for this gathering.

Say I have a mortgage — an obligation — and I don’t pay it one month. At the end of the month I have some extra money. It’s not a budget surplus. It’s the result of me not meeting my obligation.

The executive branch is currently throwing around the phrase ‘budget surplus’ with abandon without admitting that the Commonwealth has been severely underfunding nearly every program we could name in this room. That’s not a budget surplus. That’s bad policy.

So I can’t wait to dig into the forthcoming revenue debate and link arms with colleagues to ensure that it’s grounded in fairness and regional equity. I have two revenue bills I’ll fight for: One would tax the sale of luxury real estate and deliver money for affordable housing and the environment. The other has several provisions including raising the corporate minimum tax which by the way is $456, is paid 70 percent of Massachusetts corporations, and hasn’t been raised in 50 years. Yes. Fifty years.

Because we need this revenue to provide for the Commonwealth. For the common good. I’m just going to stop hers and say those words again: Common wealth. Common good.

That’s what you in this room have devoted your lives to.

In our office, we take constituent services really seriously. When a constituent calls us for help, our team turns around a makes a call on their behalf. And it’s you on the other end of the phone.

You’re on the phones. In the streets. Deep in the budget and policy weeds. And raising your voices on Beacon Hill.

And we’re all better because of it.

I’m tremendously grateful. Proud to fight for our common wealth and our common good. And humbled to be your colleague. 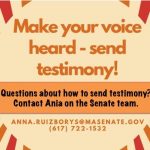 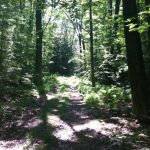 How we think about our forestsThe People's Blog