On Tuesday, I testified at the Joint Committee on Environment, Natural Resources and Agriculture hearing about H.897, S.485, and H.736. Below is my testimony.

I am here to speak to H.897, H.736, and S.485. These bills were filed by my western Massachusetts colleagues Representatives Susannah Whipps and Natalie Blais and Senator Adam Hinds.

I’ll begin with a quote from an op-ed written published in The New York Times last Sunday by former Vice President Al Gore:

So far, the best available technology for pulling carbon dioxide from the air is something called a tree.

The research on the role of forests in sequestering carbon dioxide is well established. The U.S. Forest Service estimates that forests offset 16 percent of our country’s emissions.

A recent study by the Yale School of Forestry noted that planting 1.2 trillion trees could cancel out a decade of U.S. carbon emissions.

Over the years, the Legislature has taken some good steps to fight climate change, and EEA noted in it’s required 10-year GWSA report that: avoiding “loss or degradation of natural and working lands has benefits for both climate change mitigation and adaptation.”

A chart in that same EEA report shows an increase in carbon sequestration from Commonwealth forests since 1995. And this despite the fact that Massachusetts lost 50,000 acres of forest land to development from 2005 – 2013.

Our Massachusetts forests are working overtime to breathe for us and yet they must work harder.

Massachusetts has a critical role as stewarding carbon dense forests for the entire region.

With this in mind, I believe we must again re-examine the way the state thinks about forest management given the all-hands all-sectors approach needed to beat climate change.

Accordingly, the Commonwealth’s forest management and land stewardship practices must again be updated to place additional emphasis on carbon sequestration and forest conservation.

As it is the first time H.897 has been filed, I understand the Committee will need to wrestle with some important questions as it reviews the legislation, including:

· How to create and maintain natural habitats to sustain diverse wildlife

I co-sponsored this legislation with the hope that I could engage with my constituents and this committee in these conversations.

And it’s also why I’m a cosponsor of S.485/H.736 – Relative to the Protection of Old Growth Forests, which requires an inventory and the preservation of our old growth forests which climate scientists have found sequester far more carbon.

I know there’s a way forward if we bring all stakeholders to the table.

Thank you for your painstaking consideration of these bills.

This is how we winThe People's Blog, Updates from Jo 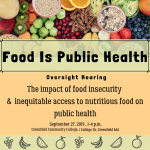