The NCSL builds connections and facilitates a rapid exchange of information among state legislators, while also representing legislatures in dealings with the federal government. Legislators from across the nation are here in Tampa (following COVID protocols) to meet and strategize about issues like climate justice, health care, public education, voting rights expansion, and more. We’re sharing solutions, teaming up to tackle challenges, and working to strengthen our collective capacity.

I’m excited to learn, to meet colleagues — and in doing both, become a stronger legislator.

Our team has a tremendous amount to share in this newsletter so we’ll get right to it:

You may have been following the American Rescue Plan Act (ARPA) funding as it has made its way from Washington to the Commonwealth. In addition to ARPA funds that were sent directly to municipalities for those municipalities to allocate, the state has upwards of $5 billion to spend. The Senate released our $3.66 billion plan today. It’s here. You can see a summary of the provisions here.

I’ve been communicating our priorities to leadership since the early summer: local public health, education, housing, workers and small businesses, western Mass infrastructure, July storm damage repairs, the creative and agricultural economies, and so much more.

I’m delighted to tell you that our public health advocacy paid off: the Senate proposal invests $250 million in ARPA funds into local public health over the next five years. I’ve been laser focused on winning this transformative investment that answers the call for racial health equity and was one of the top demands of the Health Equity Task Force which delivered its report in July. It’s also a testament to the courageous and tireless frontline public health officials who continue to battle the ravages of COVID-19 to make us well and keep us well.

This is a once-in-a-generation moment to ensure that residents in smaller, rural towns, like those in our district, have the same public health protections as those in bigger, wealthier places. These funds will ensure that the Commonwealth is prepared when the next pandemic hits, and that local officials and municipalities are supported by the state in carrying out their life-saving public health work.

Big big big thanks to the Senate President, Chair of Ways and Means, and Sen. Friedman for their leadership and support.

I’m gearing up with my team to file amendments on a range of local priorities and next week, we’ll debate the bill. More on this via a second November newsletter and social media.

We’ve talked a lot about redistricting in past newsletters. If you’d like a primer, I wrote a blog back in May about 7 things to know. It’s here. The Senate and House voted on their new maps last week, and the bills implementing those maps are now before the Governor. It’s important to note that the new districts won’t take effect until 2023, after an election where all legislators have to seek the votes of returning and new constituents in their newly-drawn district boundaries. We will also pass new district maps for the Congressional seats. The draft maps, released earlier this week, maintain most of our district in the Second Congressional district, currently represented by Congressman Jim McGovern. Colrain, Leyden, and Bernardston also move into the Second district. South Hadley remains in the First Congressional district represented by Congressman Neal. You can see all of the new maps here. They are open to comment for the next week or so.

In the October Dear Jo, I wrote about our team’s trip to the Quabbin Reservoir (Boston’s lungs and drinking water), mindful that the new western Mass Senate map would have our district nearly circling the Quabbin. I also talked about the loss and opportunity bound up in this process. It’s here.

School nurses and school superintendents in our district have been sounding the alarm about school-based COVID testing, masking, contact tracing, and needing clarity on pediatric vaccinations.

That’s why I joined with Senate colleagues to lead a meeting with CIC Health, the vendor charged with resourcing the majority of our region’s school-based COVID testing—and frankly doing a poor job. At that meeting, I realized that we had to go further. In conversation with my colleagues, many of them felt the same. So on October 21, the Joint Committees on Education, Public Health, and COVID-19 held a formal oversight hearing, which I advocated for and helped to chair, hearing testimony from the Secretary of Health and Human Services, the Commissioner of the Department of Elementary and Secondary Education, the Acting Commissioner of the Department of Public Health, as well as school nurses, epidemiologists, and more. I know these Committees must remain active, watchdogging the Administration’s COVID-19 response and fighting alongside local public health and regional planning agencies for regional equity in testing, vaccinations, contact tracing, and more.

There was a lot of activity last week around my legislation to integrate health equity considerations throughout state government policymaking. The bill is S.1388. Here’s the fact sheet. I’m proud to partner with Rep. Liz Miranda on this legislation. The bill had its hearing before the Public Health Committee on Thursday, and the night before, I led what’s called a Dean’s Seminar hosted by the UMass Amherst School of Public Health and Health Sciences. Also on Thursday, the Boston Globe published an opinion article endorsing the bill, signed by five deans from graduate public health programs across the Commonwealth. You can watch the webinar here; and you can read the deans’ opinion piece here.

October 21 marked the anniversary of the tragic death of David Almond, who was just 14 when he died while in the care of the Department of Children and Families (DCF). The tragedy is compounded by the fact that the DCF had just completed a review of his placement the week before, and determined that all was well. This was the sixth review of David’s placement that found no issues of concern. I’ve filed DCF reform legislation (S.88; read the fact sheet here) that would create an independent agency to conduct foster care reviews. Last week, along with my cosponsor, Rep. Tricia Farley-Bouvier of Pittsfield, we published an article calling for independent reviews, as is done in 41 other states. The piece ran in MassLive, The Berkshire Eagle, and Commonwealth Magazine, and you can read it here. Heartfelt thanks for the advocacy of Friends of Children on this issue.

Last week, with Rep. Bill Driscoll, my great co-Chair of the COVID-19 and Emergency Preparedness and Management Committee and our committee colleagues, I traveled underground to be briefed in the Massachusetts Emergency Management Agency (MEMA) bunker by the Director, Assistant Director, and team from MEMA. The bunker is their underground emergency command center, built in Framingham during the cold war. I’ve written before about the COVID Committee whose mission is to make sure the Commonwealth learns the brutal lessons of the pandemic and emerges stronger, more resilient, more prepared for an equitable response. Since MEMA is at the center of emergency response for the Commonwealth, it’s been essential that we understand its structure, team, mission, and how MEMA responded during COVID to the fullest extent possible. In Tampa, I’m attending workshops focused on how states can and should prepare now for a more comprehensive, more equitable response to the next pandemic and the next disaster.

District Director, Elena Cohen, and I are continuing to hold virtual office hours. If you’d like to meet with us, the next date is Friday, December 17. Please sign up here.

Last month, the Hampshire, Franklin, Worcester team spent an entire day in the Quabbin Reservoir watershed with Department of Conservation and Recreation (DCR) rangers and Pelham constituents who are experts in biodiversity, water quality, and watershed health. Like the Connecticut River, the Quabbin is a treasure in our midst. With redistricting, this Senate district will represent seven of the 12 towns in the watershed, so it’s crucial that anyone representing the region has a comprehensive understanding of surrounding forests, wildlife, and what’s needed to protect them. And what’s needed to ensure regional equity surrounding this natural resource. 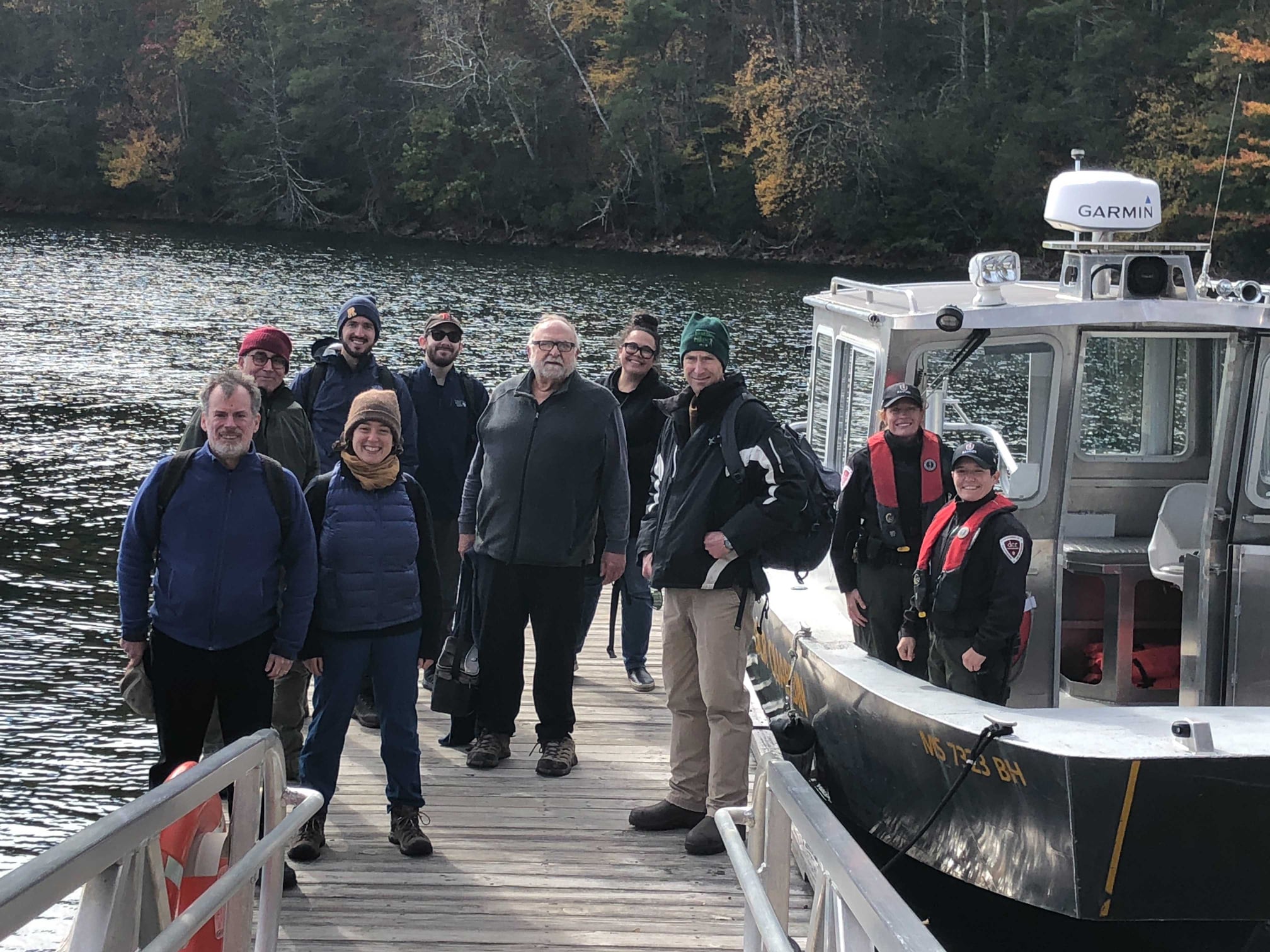 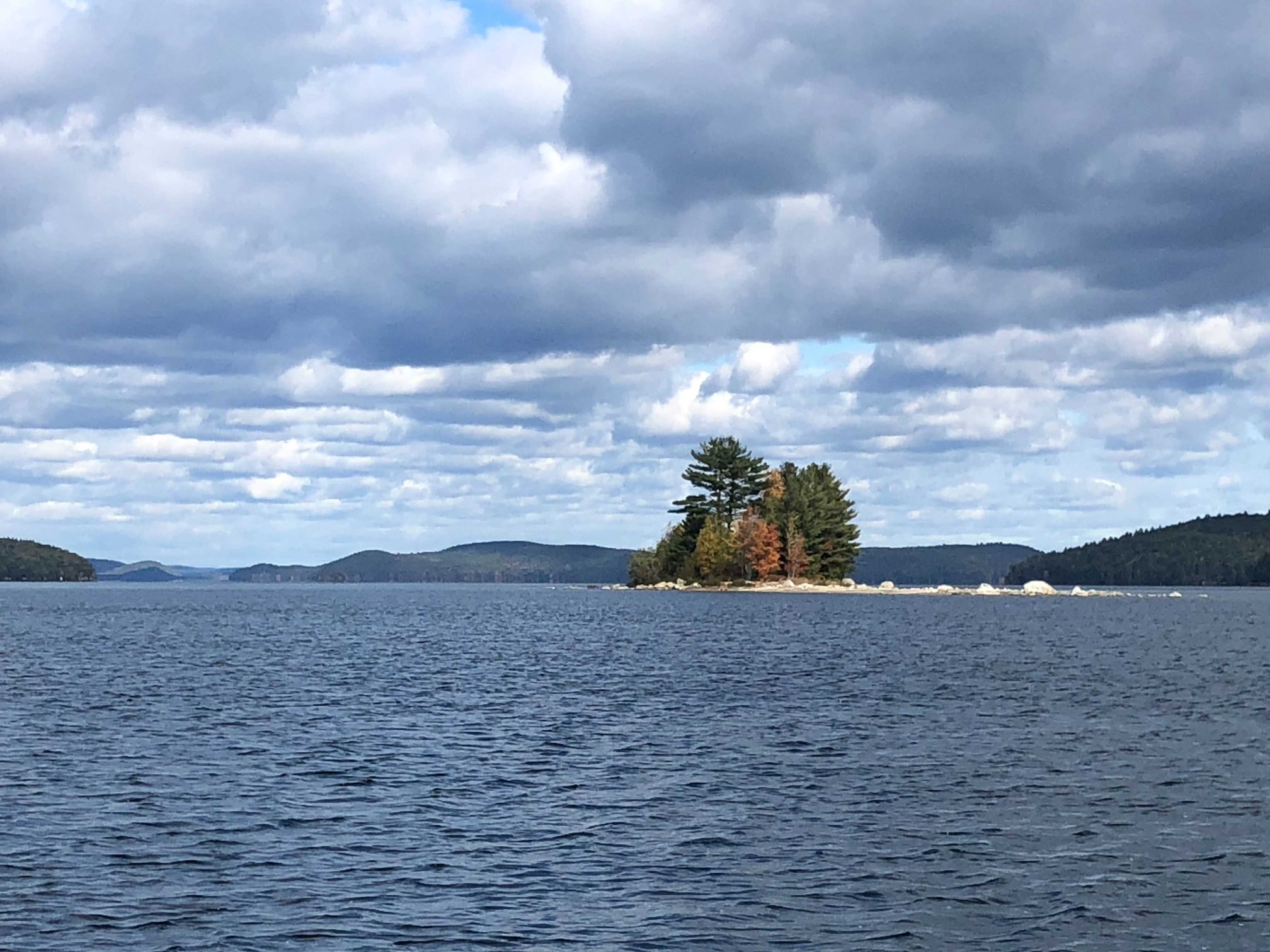 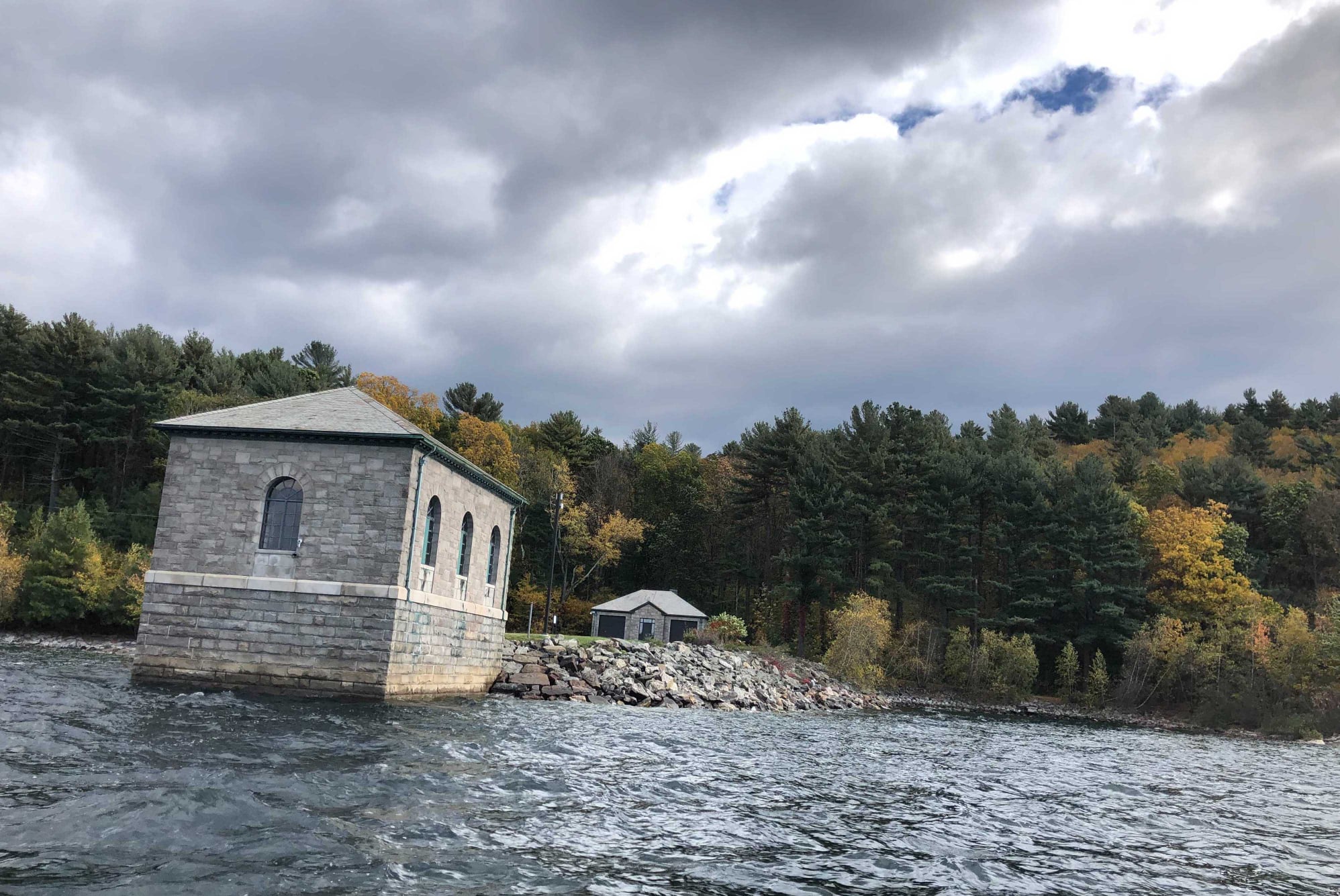 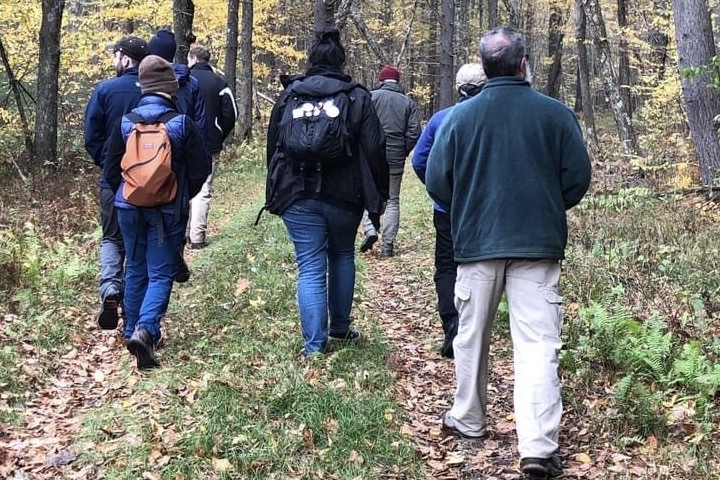 Also last month, the Hampshire, Franklin, Worcester team traveled to UMass Amherst to meet with WET (Water & Energy Testing) Facility and UMass extension experts. Topics ranged from PFAS detection and mitigation to waste water to COVID detection to solar siting to pollinator health to sequestering carbon in the soil and beyond. It was an impassioned day of talking and learning about food and water security. 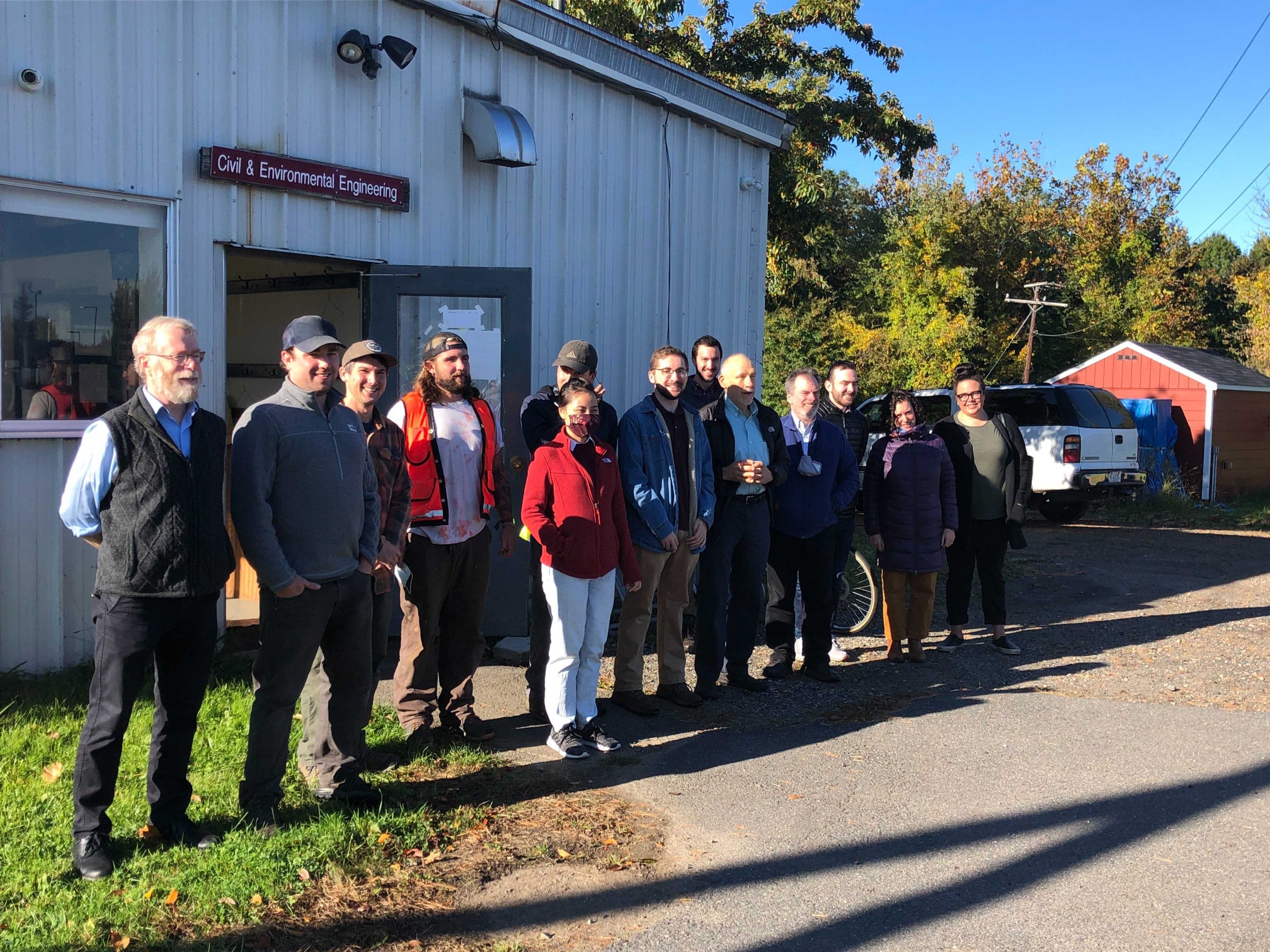 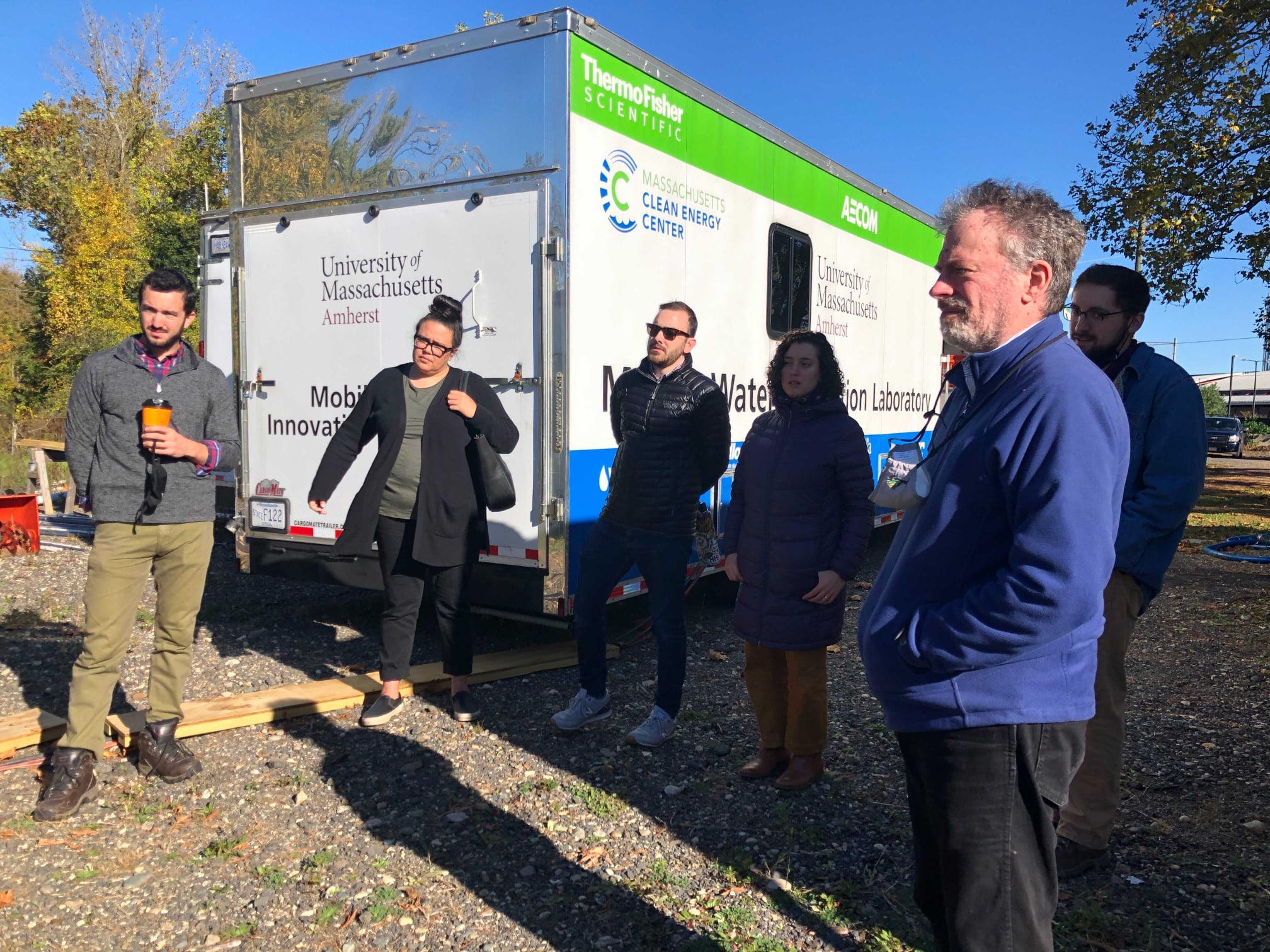 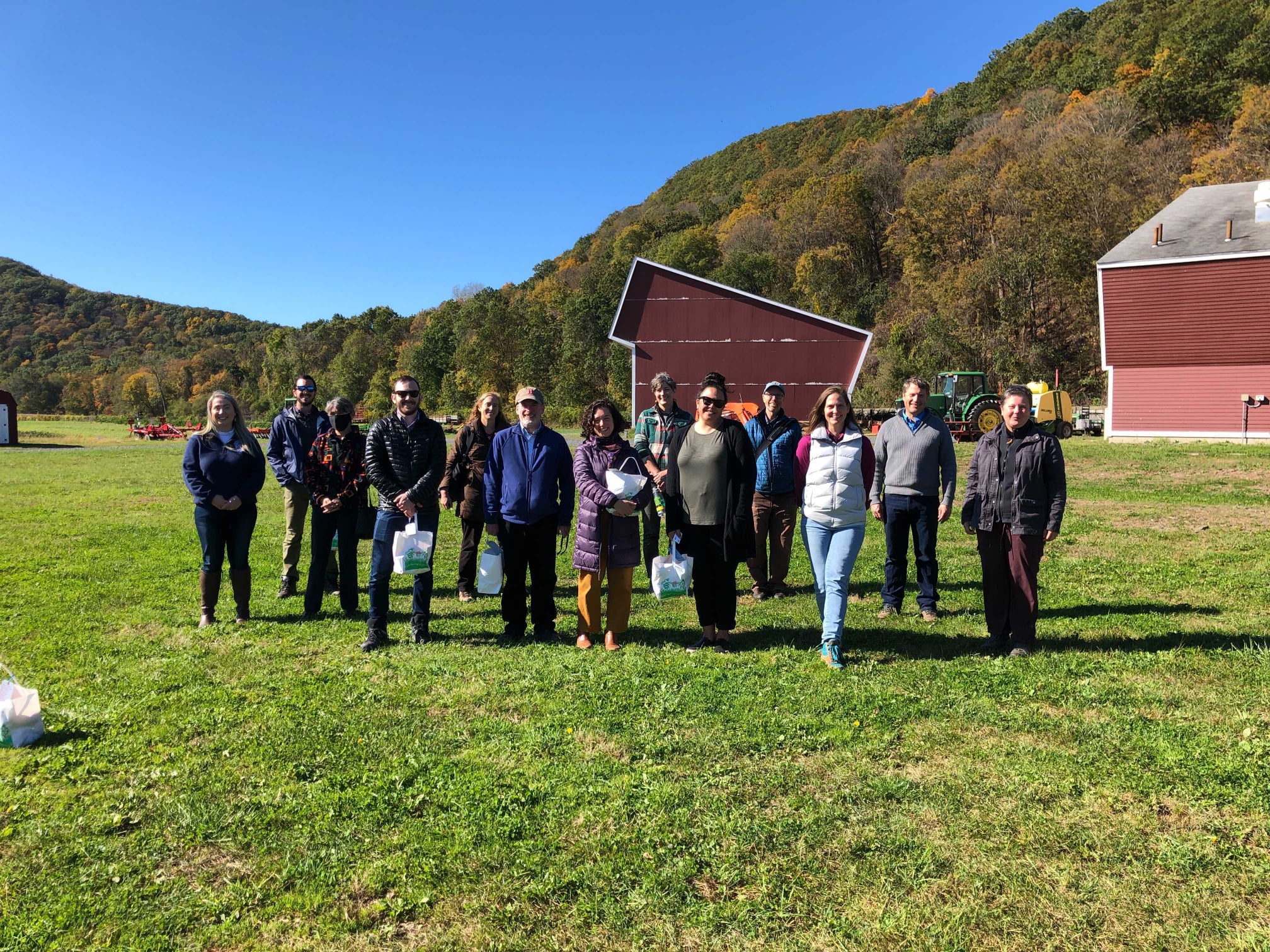 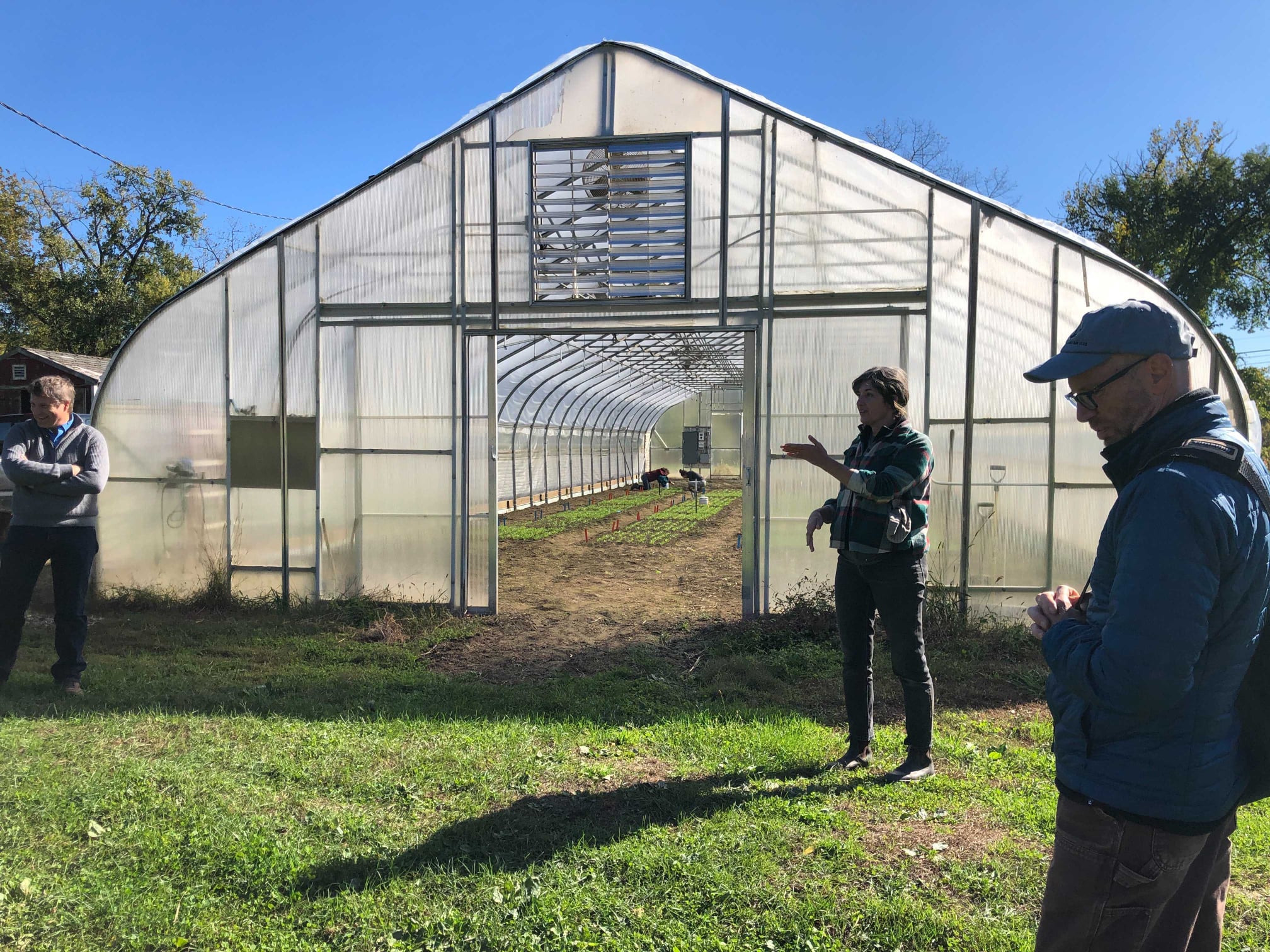 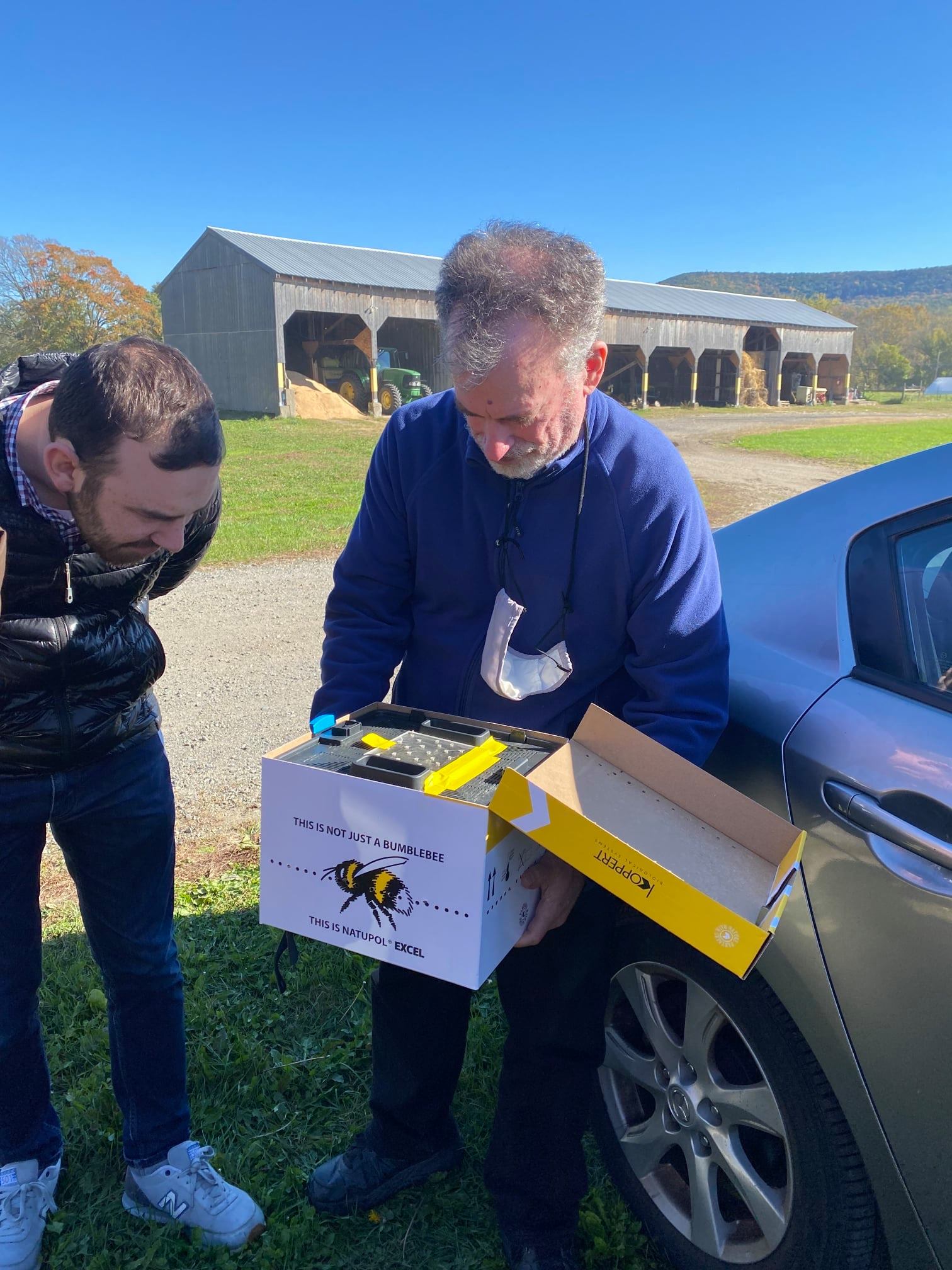 Zoe, Emily, Rachel, Kayden, and Julia are doing legislative research; assisting with committee work; drafting letters, testimony, and content for social media; and helping us get smarter about a range of issues.

Thank you to this dynamite group. 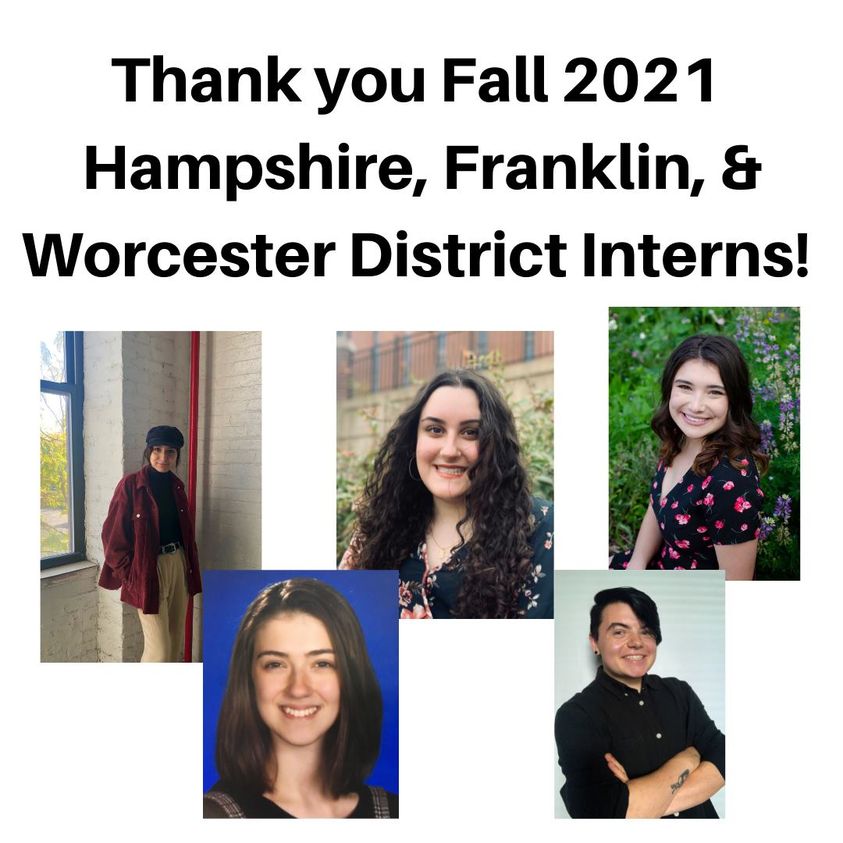 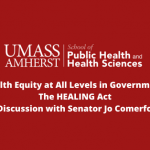 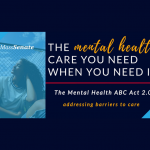