When I took office in January, 2019, the Town of Amherst had recently passed a net zero building ordinance locally. Organizers – rightly – asked for a meeting to make sure I understood what Amherst was leading. I can’t imagine ever forgetting this mind-blowing conversation around a kitchen table.

Amherst and most towns in the Hampshire, Franklin, Worcester district are part of the Green Communities Program – a state-supported program that provides funding to towns for energy efficient renovations and improvements, and also requires towns to meet strict energy efficiency standards.

One requirement of the Green Communities program is that new development in a town be constructed using the stretch code, which is our Commonwealth’s most energy efficient building code.

Amherst decided to go further, and science was on Amherst’s side.

About 40% of our CO2 emissions come from the building sector. The way we design, heat, and use energy in our buildings makes a huge difference in the fight against climate change, clearly we can’t achieve significant emissions reductions without tackling building sector emissions.

So I took the baton from Amherst and filed legislation in partnership with MCAN and Rep. Tami Gouveia to require the development of a net-zero emissions stretch code. I wanted to raise the bar on our state’s current stretch code so that Green Communities would have the state’s support to do more to address the climate crisis.

My bill was included in the omnibus Next Generation Climate Act passed by the legislature at the end of last session, vetoed by the Governor multiple times, and finally passed over the Governor’s veto earlier this session. The Governor cited the net-zero building provision as the main reason for his veto, but the legislature prevailed and the new law required the Department of Energy Resources (DOER) to develop a net-zero energy stretch code which would be implemented by the end of 2022.

In February, DOER released its proposal and announced five public hearings, which are ongoing. DOER’s work has been met with criticism (including mine).

First of all, the hearing specific to Environmental Justice communities is on a Friday evening from 6 PM – 8 PM. That falls well short of doing what it takes to solicit meaningful input from the communities that are most deserving of this progress.

Second of all, there is DOER’s actual stretch code proposal. DOER proposed not applying the net-zero stretch code to major renovations, which is a significant portion of construction to exclude from this decarbonization effort. DOER’s draft also doesn’t require renewable energy to offset 100% of the annual site emissions and it allows fossil fuels in newly constructed buildings.

So I’m taking action because it’s not enough to pass a bill, we have to see it through. And I hope you will as well. Here is information on how to raise your voice: Just click here. 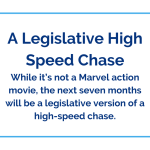 A legislative high-speed chaseUpdates from Jo, Newsletters, The People's Blog 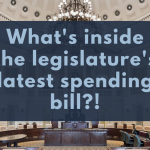