Thank you Mr. President and through you to the members.

I rise in strong support of An Act relative to out-of-hospital birth access and safety.

Thanks to the bill’s sponsor, the tireless Senator from Needham and her team. They worked hard on this bill as well as the maternal health equity legislation we’ll debate later today.

My team and I are proud to have worked on both of these maternal health justice bills through the Public Health committee process, passing them favorably.

The maternal mortality rate in the United State is the worst in the developed world. We are the only such country whose rate is on the rise, with a staggering 26% increase in the U.S. maternal mortality rate between 2011 and 2014 alone.  Currently, approximately 700 women die annually in the United States from pregnancy related complications, and a significant number of these deaths – roughly sixty percent – are preventable.

And it’s not equally bad for all mothers in the U.S.

Black mothers are 4 times more likely to die from childbirth than their white counterparts. Racial disparities in maternal mortality are inextricably tied to racism – be it historical and structural racism in the health care system, or implicit bias, or other forms.

In Massachusetts, we think of ourselves as home to the best medical care in the world, but the Commonwealth is the 17th worst state in the nation when it comes to maternal harm.

Both this bill and the bill we will be taking up later today, are important steps towards addressing this shocking disparity in birth outcomes and reducing preventable deaths.

If these last few months have taught us anything, it is that we need to listen to the lived experiences of People of Color. And then take action.

When they tell us that health care providers are dismissing their pain and suffering, we need to listen.

When they tell us that they cannot access culturally competent health care, we need to listen.

And when they are telling us that mothers in their communities are dying, we need to listen.

Research is clear that professional midwives can help lower the maternal mortality rate and can help to close racial equity gaps in birth outcomes, leading to healthy parents and babies.

This bill establishes a process for midwives to become registered and licensed with the Department of Public Health.  The Board will establish standards for midwife education, and will issue regulations to allow midwives to provide high-quality maternal care.

Parents and caregivers have spoken out for maternal equity. And today, the Senate is taking important and effective action.

Once again, thank you to the Senator from Needham who has led beautifully on this legislation  and the subsequent maternal health equity legislation.

I urge my colleagues to vote YES. 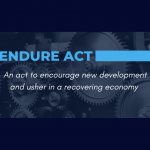 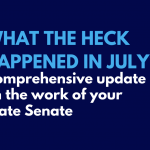 What the heck happened in July?!The People's Blog, Updates from Jo