Today was a productive, exhilarating (and a bit exhausting) day where I was privileged again and again to be your voice in the state legislature.

In the morning, I testified at a hearing on my bill to allow for Gender-neutral Identification documents for drivers’ licenses and birth certificates. Here’s my testimony:

I am honored to offer this testimony on S. 2055, An Act relative to gender identity on Massachusetts identification and deeply honored to have filed the bill. I’m also grateful for the powerful legacy of work from Senate President Karen Spilka and others on this critical Civil Rights issue.

People know what gender they are. This bill simply allows their official documents to match how they self-identify. It allows for the Commonwealth to mandate gender identification and IDs as diverse as our people.

Our current binary options are arcane, limited, and overly restrictive and have created a situation where the government is infringing on people’s right to self-identify.

You will hear today from people who will explain how our policy affects them.

Here’s a letter I received from a constituent, Dr. Genny Beemyn, who directs the Stonewall Center, at the University of Massachusetts, Amherst:

The ability to have a third option on my driver’s license would make all the difference in the world to me. Not only would it mean that I am misgendered less often when I present identification, but it would also make me feel acknowledged and visible. As a trans person, I am told in subtle and not so subtle ways that my life does not matter; this change would be a powerful step forward by Massachusetts to say that my life and the lives of other trans people do indeed matter.

We are proud parents of our 10 year old son, Soph Levin. Soph is a transgender male and was born a biological female.

Soph is going to be a successful person in the world because of the confidence in himself.  And while that confidence comes from many places, we realize that the freedom of our region, which has allowed us to affirm our child in every way … through our public school system, our social circles … is a major factor in that confident self. It’s also not a luxury and commonplace to all Massachusetts residents. We need to do everything we can to make sure that everyone has the opportunity to feel as supported as we, and most importantly Soph, has felt.

Allowing people to have the confidence to legally confirm the gender of the person they are, is a major step in helping the citizens of our commonwealth feel more apart of our community, our state.

And it is that community and participation that will make our Commonwealth a better place for all of us.

And here is an excerpt of a letter from Anthony Marqusee, a non-binary transgender person born and raised in Massachusetts:

When I was 21, I finally began to come out about being transgender—specifically, nonbinary. I had struggled with my gender identity for years, but as a child and teenager, I didn’t know nonbinary people existed. I didn’t feel fully comfortable living as a woman, but I believed that if I didn’t feel like a man either, it was better to just stay quiet. Luckily, our society had come a long way even in the short time since then, and I now know nonbinary people who are thriving as teachers, lawyers, dancers, data analysts, and more.

Yes, Anthony. Society has come a long way. Now it’s time for our Commonwealth to go the distance.

This legislation would affirm the ability of people to be identified by their preferred gender on state documents and forms. It requires the Registry of Motor Vehicles to allow someone to choose their gender, including a non-binary option, on driver’s licenses, state identification cards, and liquor purchase identification cards. This bill just codified the Registry’s intended current direction.

In addition, to provide more information to the legislature about other instances where this may be an issue, it asks the Attorney General to report back on all other state forms that request a person’s gender and indicate if this is required by a state or federal law, regulation, or just practice.

The designation X has emerged as the standard gender-neutral designation on state IDs and records, and is available in at least ten states on driver’s licenses. This includes Mike Pence’s home state—Indiana—and the state of Arkansas.  At least four states recognize this on birth certificates. It is also consistent with sex designation standards for internationally recognized IDs and passports as set by the International Civil Aviation Association.

As you remember, a similar bill (S. 2377) was approved by the Committee during the last session and was engrossed by the Senate. Unfortunately, the bill did not make it to the finish line in 2018. My team and I worked closely with the Senate President in drafting this year’s bill and am confident that we can successfully enact it into law this year.

This bill is simply about advancing basic human dignity and #VisibilityForAll. In the name of the basic human rights we protect for everyone in the Commonwealth, I urge the Committee to give this bill a favorable report at its earliest convenience.

The Senate President joined in testifying, and with her support I’m confident that we can advance this bill quickly.

I then sat down with the state’s Commissioner of Public Health, Dr. Monica Bharel. We share a strong view that public health is a critical tool in addressing pervasive inequities in society. We discussed the need to reduce lead exposure for children, reduce tobacco use, and expand funding for HIV treatment and prevention.

Then the Senate met in formal session. I voted in favor of three critical legislative initiatives. First, we voted to provide up to $8 million to women’s reproductive health organizations in Massachusetts to offset the loss of federal funding through the Trump Administration’s changes to the Title X program. More than 75,000 low and moderate income people receive essential care, including preventive health services like STD screening and treatment, breast, cervical, or prostate cancer detection, and HIV testing at these clinics.

Second, we passed legislation to ban “conversion therapy.” This practice is a remnant of our nation’s shameful history of oppression of lesbian, gay, bisexual and transgender people, premised on the notion that their behavior reflects a mental disorder that must therefore be changed. By passing this bill, we affirm that LGBTQ individuals are not broken, do not need fixing, and deserve love, compassion and a life free of harassment and discrimination. I voted against a number of amendments proposed to weaken the bill.

And third, we voted to “lift the cap” on benefits for kids. Massachusetts is one of only 17 states that still denies benefits to children conceived while the family is receiving temporary assistance. This policy denies assistance to 8,700 children in our state, forcing families to choose between adequate nutrition, diapers, and warm winter clothing, or to go without.

I’m proud to represent the people in our 24 cities and towns, and today was a great example of how we can make real progress. If you have any questions or want to share ideas with me, please contact my office. 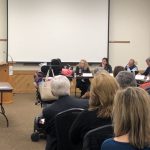 The importance of state investment in regional transitThe People's Blog, Updates from Jo