Meet Seth McKenzie. Seth is one of the incredible interns on the Hampshire, Franklin, Worcester team this summer.

He has a message for all of us about the power of Gen Z. The power of the vote. Please read on.

A New Generation of Voters

For too long, our voice has been ignored. For too long, our interests have been overlooked or simply disregarded. We are sick of watching people our own ages get gunned down in schools. We are sick of the utter disregard, and too often disbelief of a changing climate. We have been demanding change, and not enough arrived. But now we can vote. Now, we have the power we so desperately desired. Now, there will be change.

The time has come to elect new officials into office, officials who will fight for our interests, and to support those who already do. This is why the expansion of voting rights is imperative. If this truly is a government for the people, it is only right that every person has a voice. If this truly is a government by the people, it is necessary that everybody votes.

We Gen Z need to see our newly gained ability to vote not as a privilege, but as a duty. We need to go to the polls. From national elections to local elections, we need to vote in every election we can. It is time to make this nation listen to our voice. It is time for this nation to truly understand what it means to be Gen Z. 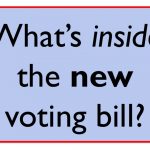 What’s inside An Act relative to voting options in response to COVID-19?!The People's Blog