By Jo Comerford
Posted April 15, 2022
In The People's Blog
The Senate passes a smarter clean energy future bill (with MORE work to be done)2022-04-152022-04-15https://senatorjocomerford.org/wp-content/uploads/2022/06/jo-web-header-v2.pngJo Comerfordhttps://senatorjocomerford.org/wp-content/uploads/2022/04/website-featured-image-for-optimal-fb-sharing-21.png200px200px
0

Earth on Track to Be Unliveable.

I haven’t been able to get it out of my head since I saw that newspaper headline in the wake of the most recent United Nations IPCC report. It’s been on my mind all week and especially yesterday, when the Senate debated and eventually passed omnibus clean energy legislation.

Below I unpack what’s in this bill, the amendments where I focused, and what still needs to happen for this to become law. But first, here’s how it all went down:

When the Senate’s omnibus clean energy legislation, the Drive Act (summary below), was released out of the Senate Ways and Means Committee last week, I was delighted to see that it included legislation I had filed with Rep. Natalie Blais to expand access to solar net metering.

For months I had been lobbying for the inclusion of this legislation in the omnibus clean energy bill. I had also been seeking the inclusion of legislation I filed with Rep. Domb to assess the energy efficiency and environmental health of our K-12 school buildings and to set standards for green and healthy schools. Although that legislation was not included in the Drive Act, there was still a chance to file amendments.

And file amendments I did.

I want to thank Climate Action Now, Mothers Out Front, UMass Clean Energy Extension, the Northeast Organic Farmers Association, the Nature Conservancy, Dorrie Brooks, Claire Chang, and others who weighed in with razor-sharp, in the weeds thinking on amendments and made me smarter about where the omnibus bill could be improved.

I ended up filing 10 amendments. After a 12-hour debate on Thursday, four of the amendments I filed were adopted – including the green and healthy schools provisions. While I’m glad for the wins, I also know we MUST keep working to pass the amendments that didn’t succeed, like one called for by constituents to more accurately account for methane emissions or to mandate more fossil fuel-free building construction. I promise I’ll keep pushing to meet this urgent moment.

I’ve summarized the successful amendments and the bill below. The House of Representatives passed its own clean energy omnibus a few months ago and my guess is that the bill that eventually arrives on the Governor’s desk will include some provisions from both bills. The House’s omnibus included critical grid modernization legislation that I filed with Rep. Natalie Blais (thanks to Rep. Blais’ great work!), so there’s a lot to like in both bills and work remaining to ensure these important provisions become law. But the overwhelming and sustained advocacy and partnership from constituents and advocates gives me all the confidence that we will see this through.

Summary of the four amendments adopted

Amendment 114 restores a Pollinator-Friendly incentive in the SMART solar program or any successor solar incentive program. The SMART program provides incentives for qualifying solar installations, and previously included an incentive for solar installations that promote native meadow habitats under and around solar panels, until the Department of Public Utilities disallowed that incentive in 2021. Pollinators play a critical role in local ecosystems and UMass Clean Energy Extension offers a rigorous Pollinator-Friendly solar certification. The amendment reinstates incentives to achieve pollinator-friendly certification when siting solar arrays among native vegetation to provide habitat for pollinators and other wildlife species.

Amendment 128 requires an assessment of K-12 school buildings statewide for energy efficiency and environmental health factors. The amendment requires the Department of Public Health, the Department of Elementary and Secondary Education, the Department of Energy Resources, in consultation with the Massachusetts School Building Authority, to assess and report publicly on strategies to implement green and healthy school standards. The amendment draws from S.1382, An Act for healthy and green public schools, which I filed with Rep. Mindy Domb.

Amendment 131 ensures the Commonwealth’s next solar incentive program improves upon the current SMART solar program. As DOER considers the successor solar incentive program to the current SMART program, the amendment ensures the new program will align with high-level climate roadmapping and emissions reduction goals, give priority to solar projects on the built environment, support towns in grappling with solar expansion and local land use regulations, and avoid and minimize negative impacts on natural and working lands.

To read the final text of any amendment, click on the number of the amendment here. (Warning: legalese.)

The single parcel rule is an issue I have been working on since 2019, when local solar advocates called a group of legislators to a meeting at Village Hill in Northampton. After that meeting I filed S.2145, An Act expanding equitable access to solar net metering in partnership with Rep. Natalie Blais, which permits specific exemptions to the Department of Public Utilities’ (DPU) single parcel rule preventing more than one solar array on a single tax parcel from accessing the Commonwealth’s solar net metering program. The bill was included in the Drive Act. It corrects the single parcel rule oversight and helps to promote the use of solar power by making it affordable and accessible to all residents of the Commonwealth. Multiple necessary solar projects in the district and throughout the state have been delayed, prevented or curtailed due to the existing single parcel rule. I want to honor Bill Stillinger, who helped draft this legislation when he worked at PV Squared and who passed away in 2019.

Summary of the Omnibus Drive Act

Around 20 percent of greenhouse gas emissions in Massachusetts come from the power plants that fuel its energy grid, making support for clean energy alternatives necessary to meet the Commonwealth’s goal of having net-zero greenhouse gas emissions by 2050. Recognizing this, the Drive Act includes significant provisions to deploy clean energy infrastructure, including those related to offshore wind energy, solar energy, and energy storage. Acknowledging the importance of growing the Commonwealth’s green economy, this bill allocates $100 million to a Clean Energy Investment Fund to support infrastructure development in the clean energy industry.

To assist with the financial viability of offshore wind energy projects, this legislation updates the procurement process for new offshore wind energy investments to ensure that the Commonwealth receives as many competitive bids as possible, that all projects maximize equitable economic development opportunities, that environmental impacts are mitigated, and that ratepayers are protected throughout the process. The bill also provides more flexibility to offshore wind developers by adjusting the existing price cap for offshore wind projects, allowing for price increases of up to 10 per cent of the previous procurement. It also requires that any increase in price must be the result of economic development investments for low- and middle-income populations and diversity, equity and inclusion programs. This crucial change will protect ratepayers from significant price increases and ensure that offshore wind investments support equitable economic development in the Commonwealth.

To support the advancement of solar power, the bill expands access to solar net metering, eliminates the so-called ‘donut hole’ for on-site solar energy net metering to promote residential solar; and requires the Department of Energy Resources (DOER) to make recommendations for the successor program to the current SMART solar incentive program.

In addition to wind and solar power, the bill addresses other innovative sources of clean energy such as fusion and geothermal power, and amends Massachusetts law to ensure that the state can consider potential options for the development of safe, clean energy sources. Acknowledging the harmful health and environmental impacts of biomass facilities, this legislation removes biomass from the list of energy-generating sources that are allowed to receive state incentives for clean energy. To ensure that the Commonwealth has adequate storage systems to accommodate all the clean energy that Massachusetts will be adding to its energy portfolio, this bill directs a study of how to optimize the deployment of long-term energy storage systems.

As the transportation sector is the largest source of fuel emissions in Massachusetts, the bill takes steps to encourage the use of electric vehicles, including codifying into statute, expanding, and allocating $100 million for the state’s MOR-EV electric vehicle incentive program, which provides rebates to individuals who purchase electric vehicles.

Under the Drive Act, the rebate amount will increase by $1,000, to $3,500, for passenger cars and light-duty trucks. Moreover, electric vehicle purchasers who trade in their emission-producing vehicles will be eligible for an additional incentive of $1,000. For the first time, rebates provided through the MOR-EV program will be administered at the point of sale, rather than through a rebate that can take up to 90 days to receive. The bill also makes used vehicles eligible for rebates.  Further, the bill directs the department of energy resources to conduct an outreach campaign to promote awareness about the MOR-EV program among consumers and businesses in underserved and low-income communities, as well as in communities with high proportions of high-emission vehicles.

The Department of Public Utilities (DPU) would be required to set vehicle electrification and greenhouse gas emission requirements for electric vehicle companies. In addition, to ensure that zero-emission vehicle charging remains affordable for consumers, the bill requires all electricity companies to submit proposals to the department of public utilities for how they will offer reduced electricity rates for consumers who charge their zero-emission vehicles at off-peak times.

Amendments adopted during the debate include those to:

The Drive Act makes targeted enhancements to the Mass Save program, which provides rebates and incentives for owners and renters related to efficient appliances and other home energy improvements. Under the bill, priority for Mass Save projects will be given to those that maximize net climate, environmental, and equity impacts. Beginning in 2025, Mass Save funds will also be limited in most instances from going to any fossil fuel equipment.

This bill requires the DPU to conduct an adjudicatory proceeding prior to approving any company-specific plan under the DPU’s future of heat proceedings. In addition, the bill requires DPU to convene a stakeholder working group to develop regulatory and legislative recommendations for how Massachusetts can best align the Commonwealth’s gas system enhancement program with the state’s 2050 net zero goal. The working group must submit its final recommendations to the Legislature by July 31, 2023.

Amendments adopted during the debate include those to: 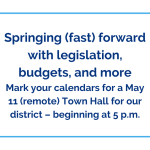 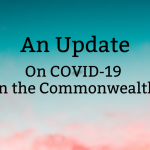 An Update on COVID-19 in the CommonwealthThe People's Blog