Remarks given at The Future of Public Service
School of Public Policy, UMass Amherst, August 29, 2019

Thank you to the School of Public Policy for inviting me to speak with you today. I’m tremendously honored to join Samantha Hamilton in this conversation about the future of public service. And grateful to you all for taking the time to have it.

For years and years, I’ve had a 1907 quote from playwright George Bernard Shaw stuck in my brain. I’ll tell you why at the end.

It begins: “This is the true joy in life. Being used for a purpose.”

For me, after a sort of zig zaggy start, I found purpose in public service which I’ve long thought of as work to equitably level the playing field. Work to pound on power structures like government to ensure that it grinds away in the best interest of everyone.

Shaw continued, “I am of the opinion that my life belongs to the whole community. And as long as I live it is my privilege to do for it whatever I can.”

Those words — do whatever I can for the whole community to which I belong — have taken on new urgency 112 years later in what can be described as times of great peril and great opportunity.

The opportunity is, of course, in part embodied by the breathtaking surge of activism and first-time candidates seeking elected office in the wake of the 2016 election and Trump.

From Washington, D.C. to state houses and town halls across the U.S., the ground is rumbling as more and more people take to the streets and cram inside of government to forge real and lasting change with innovative, 21st century ideas and analysis.

The peril of today takes many forms.

It’s the full-on assault by Trump and his cronies on most everything I (and I’d wager many of you) care about — from communities of color to reproductive rights to the environment to the fate of immigrants at our borders.

It’s the deadlocked polarization in Washington. The corrosive impact of big money on our politics. And the fact that from gun safety to wages and jobs to the climate crisis to the fate of public education — we’re at seemingly countless and critical crossroads. All at once.

So what do we do? How do those of us in public service prepare? Here are five ideas.

First: We have to resist polarization and issue silos by building relationships with people across the proverbial political aisle and seeing the intersection of the issues we care about. For example, I would not be acting in the best interests of my constituents if I forego collaborations with Republicans or to refuse to listen to critiques from folks who disagree with my positions on issues. Where I can work across the aisle to advance common sense policy — that is what I should do — and hearing from those who are opposed to my position on an issue helps me understand the full scope of the way that issue will affect constituents.

And, similarly, it’s not OK for me as Senate chair of the Joint Committee on Public Health to dive into public health issues without first trying to see the connections between community health and the environment, transportation, racial equity, and more.

We’re simply stronger if we’re together, moving complex, intersecting policies forward. That’s why I collaborated with Republican colleagues to file legislation to make it easier to donate food to food pantries, signed on to a Republican-led budget amendment to increase funding to protect open land and why I’m leading a public health oversight hearing focused on exploring the intersection between health and food security.

Two: We have to hold lawmakers at every level accountable. In large measure, Americans have been divorced from our civic and community infrastructure. Budget cuts and testing have squeezed teaching about civics out of our curriculum. The business of life and the battle to make ends meet have left us with less and less time to engage. But engage we must. Especially now in the lead up to the 2020 election and what must be a referendum on the fate of our nation, the public sector, and our common well being.

I’ve often said that the only thing more powerful than big money in politics is an informed, engaged, and passionate electorate on the move for justice.

And even though — together — we’re more powerful than the vice of big money in our elections, we must fight its impact on every level of government. This is number three.

There are many national groups battling against the tide of big money let loose after the Supreme Court’s Citizens United decision. We also can and must take action at state and local levels.

For example, I’ve introduced bills to limit the maximum political donations to candidates and to super-PACs in the Commonwealth, and to ban political donations by companies owned by entities outside of the U.S. And I’ve co-sponsored a bill to require presidential candidates to submit their tax returns to get on the ballot. Cities and towns in the Hampshire, Franklin, Worcester district have also passed ordinances limiting political donations at the municipal level. We can do this.

Number four: Consider running for elected office or serving in any level of government. They’re all essential. For government to work, it must look like and embody the people it serves. That means we need the greatest possible diversity of people to drive local, state, and national policies forward.

And finally number five: Be bold. This is not the time for half measures or fear. This is a “leap and the net will appear” moment. We’re facing big problems. Problems festering long before 2016. And big problems need big solutions — the kind that are driven from people in public service.

People will tell you, “It’s not possible. It’s just not done this way.” Hear those words as an invitation to try. And if you fail, terrific. Just fail fast and move on. If you hold on to something that’s not working, you’re blocking what’s next.

I’ll close by sharing two stories and a quick litany of some hard-earned wisdom.

I learned in my nonprofit work and now in government that “no” has to mean “not now.” Here’s a little story about how this manifested for me. I took over as executive director of National Priorities Project in 2008, in the midst of the financial crisis. Donations plummeted as the economy seized up and I had to scramble for funding to meet NPP’s mission. I reached out to many national foundations to make the case for them to invest in the organization. They all turned me down, but I kept calling. One very nice program office at one of the world’s largest foundations actually said to me, “Jo. You have to stop calling me. Really. Stop. I can’t fund you. You have to wait in a long line.” And I said, “Bill, I can’t do that. When I hear you say ‘no’ I translate that into ‘not now’ which means I have to keep calling.” NPP received funds from them the next year.

I also learned that we have to think short-term and long-term in the same moment. Because we need both. We must deal with what’s in front of us and we also have to remember that there are solutions to problems that we can’t even imagine. Yet. This means that we have to be in the weeds of an issue and 30,000 feet above at the same time. We have to be open to the possibility that a square peg just might fit into that round hole. Someday.

When I was the director of programs at The Food Bank of Wesern Massachusetts we dug into a conversation about hunger and food insecurity that focused on not just meeting the immediate demands of hunger, but also working ourselves out of a job. We started a program called Target Hunger where we put electronic benefit transfer machines in farmers markets that we had organized so people on Food Stamps (now called SNAP) could access their benefits in a place with nutritious, local food. Oh it was like moving a boulder up a hill. Hard to start those markets in communities akin to food deserts. And really hard to make those machines work, let alone get grants to double or triple each Food Stamp dollar to make it worth the trip to the farmers market. Fast forward to 2019 and what’s now called the Healthy Incentives Program which does exactly these things as one of the most coveted and effective programs in the state — thanks to community and nonprofit leaders and tenacious public service policy wonks who didn’t let go of this idea. And pushed and shoved until it became real state-wide. The Rev. Dr. King’s arc of the moral universe does indeed bend toward justice, but those of us in public service need to give it a big shove to hustle it up.

And now the litany in three parts:

Part one: Do everything you can to find reciprocity in the work you take up. Public service isn’t a one way street. We get back way more than we give knowing that we’re part of something bigger than us as individuals. Understanding that from the beginning will help prevent us from getting crispy, which is my word for burnout.

Two: People — advocates, activists, those most affected by injustice, policy analysts in public service — make government work. The vast majority of staff and officials in the State House go to work each day with the best interest of the Commonwealth at the top of their minds. But it’s the pressure from the grassroots that makes us move. One of the reasons I wanted to serve in government is that I’d been on the outside of this equation during my career, reaching across to nudge elected officials, and I wanted to be an elected official who reached back — because that connection is at the heart of transformative power and possibility.

And lastly: Those of us who are privileged enough to choose a career in public service have to pay it forward with an eye toward equity. We have to help build tomorrow’s leaders and then make room for their brilliance by listening deeply and making sure they have a proverbial seat at the table.

Here’s the end of Shaw’s famous quote: “I want to be thoroughly used up when I die,” Shaw said. “For the harder I work the more I live. Life is no ‘brief candle’ for me. It is a sort of splendid torch which I have got hold of for the moment, and I want to make it burn as brightly as possible before handing it on to future generations.”

The splendid torch of public service belongs to all of you now. Passed to you by great ones like France Crowe, an incredible justice activist from this region who died just days ago at age 100. She’s long embodied this quote for me. Her splendid torch lit the way with a kind of love-filled ferocity that only a public servant can have. She organized and urged us on for upwards of 75 years with a strategic humility and steadfast moral compass that built and won movements.

Now, you’re the ones we’ve been waiting for. I’m already humbled by what you will do in the world. Lord knows we need you.

I look forward to our discussion.

Thanks again to UMass for allowing me this opportunity to share a few ideas. 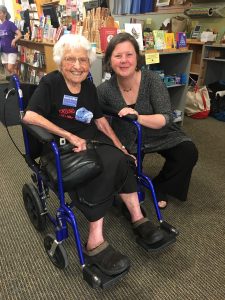 Frances and me at Odyssey Bookshop last summer. 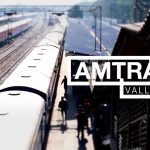