I delivered these remarks during the Senate FY21 budget debate:

I ask for unanimous consent to make a brief statement.

Madam President, I’d like to speak to amendment number 82 — Revenue for a Strong Commonwealth, which was withdrawn from consideration moments ago.

The Senate will not debate and vote on this revenue proposal in this budget. But I urge us to take up revenue at the top of the next session. And I know that I am not alone in my desire to do so. The Senate President has spoken about the need for a comprehensive modernization of our tax code. And my thanks to the gentleman from Pittsfield who has been leading a robust revenue working group process, called forward by the Senate President — a process that, with Senator Hinds’ steadfast leadership, I am confident will yield the kind of fairly-raised revenue that will rightly increase the state’s investment in education, transportation, climate, affordable housing, and more.

With our current fiscal picture, many agree, and I believe: Public investment cannot wait. And so I deeply appreciate the Chair of Ways and Means for this fiscal year budget — which invests almost two and a half billion more in our Commonwealth than last year’s budget. Yet by all accounts, we know next fiscal year, which is right around the corner, will be tough. And the Senate must be ready to fill painful fiscal gaps with our own fair plan because, in a crisis such as this, austerity budgeting is the enemy.

When we think about raising taxes, context is key.

Right now, the context is that we’re in the middle of a pandemic that has caused the highest death rates among the most marginalized communities and has ushered in a recession that disproportionately affects the lowest income workers and small business owners.

Right now, the context is that our state’s income tax has dropped from 5.95 percent in the late ‘90s down to 5.05 percent today. We’ve cut other taxes since the ‘90s too — a calculation by the Massachusetts Budget and Policy Center shows that cuts to the income tax, the capital gains tax, and the dividend and interest income tax — as well as a doubling of the personal exemption since 1998 — means that last year, the Commonwealth missed out on around $4.15 billion in revenue that we’d otherwise be counting on in this budget.

In fact, between 1977 and 2016, Massachusetts reduced taxes more than all but two other states — Arizona and Alaska. And when these taxes were cut, more than half of the savings went to households in the top 20 percent of income.

Urged by constituents and advocates under the Raise Up Coalition banner, I filed this amendment so that we could discuss this issue during the budget process, to deepen our collective commitment for the debate and vote to come after the new year. Again, my thanks to the Senate President for convening the Revenue Working Group and I very much look forward to having the Senate consider its proposals. 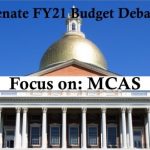 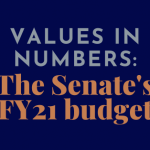 The values behind $46 billion: The Senate’s FY21 budget is our collective values in numbers.Newsletters, The People's Blog, Updates from Jo