In response to resounding calls for racial justice, the Senate’s An Act to Reform Police Standards and Shift Resources to Build a More Equitable, Fair and Just Commonwealth that Values Black Lives and Communities of Color—the Reform, Shift + Build Act—proposes a number of reforms. The bill is a product of the Senate’s Racial Justice Working Group on which I’ve been proud to serve at the request of the Senate President.

Here’s a link to the bill for your review.

I’ve heard from a number of constituents and wanted to provide clarification on aspects of the bill where there are both concerns and confusion.

The bill seeks to:

Please do not hesitate to reach out to me directly if I can offer any additional information. My email is jo.comerford@masenate.gov. 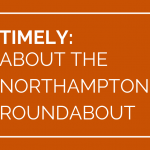 Timely: About the Northampton roundaboutThe People's Blog, Updates from Jo