The Massachusetts Health Policy Forum held their annual student forum today in the State House. Public health graduate students from across the state gathered to hear from legislators, advocates, and state health officials to learn about how policy is made and what they can do to influence health policy.

I was delighted to offer the following remarks focused on the leaps that we can and must take for public health.

It’s an honor to join you today, alongside fellow speakers who are fierce public health champions. And in a room with you who are leading the fight for better care for our people and communities. Selfishly, I hope many of you will choose to stay here in Massachusetts, where there are numerous challenges that need your big brains and massive opportunities.

I’m a year into the best and hardest job I’ve ever had — as a Massachusetts state Senator representing the 160,000 people of the Hampshire, Franklin, Worcester district. Twenty four cities and towns in the most beautiful part of our Commonwealth. (If I may say.)

I ran for office because I believe in government. Believe that it can and should work in the best interest of everyone. (Not that it always does. But it can and it should.)

I’ve spent most of my professional life as an organizer and advocate outside of government — holding lawmakers like me accountable. From the outside, and now from the inside, I’ve seen first hand that government only works when people make it work.

The unbreakable, inside/outside bond between elected officials and their constituents is the real driver of positive change, with constituents and advocates — folks like YOU — the most important piece of the equation.

As you know, a major focus of mine this session is the public health of our state. Because I hail from the western and rural part of our Commonwealth, I focus even more deeply on rural health and health inequities. My constituents endure critical primary and mental health care shortages. Telemedicine is largely still an aspiration because so many still live without high speed internet. Because of a near absence of workable public transit, treatment for issues like substance use and addiction can be all-day affairs, as evidenced by a constituent who commutes five hours each day for her methadone treatment.

The Public Health Committee this session is rich in important and sweeping bills. We’re considering upwards of 400. Among the most pressing themes center on equity, like:

Our committee also worked on and pushed out a good and comprehensive bill to ban all flavored vaping and tobacco products, including menthol, which was signed into law last year as one necessary step in addressing the vaping epidemic among young people.

Amid all of this, I’ve been sobered by the reality that conversations around true public health initiatives remain largely sidelined in state policy. As a stark reminder, our state’s budget for MassHealth and other medical programs is many, many, many times larger than spending on prevention and wellness. I believe strongly that we must start to level this out so that investing in prevention becomes just as important as treating people when they’re ill.

This makes good moral and ethical sense. And, it turns out, it’s also the correct fiscal posture.

It’s one of the reasons I filed and fought for a strong bill that takes on health equity that our committee just voted out favorably. We have glaring health disparities in Massachusetts. Improving health requires more than just a focus on the DPH programs. You all know that significant social determinants of health include: education, economic stability, housing, transportation, and the built environment, so my bill requires that each state budget initiative have at its core a health equity impact statement, examining the health impact of decisions across an array of sectors critical to our public health.

My belief in health equity is also at the core of my push for Medicare for All. It’s time to build on the national momentum and push forward in Massachusetts with everything we have.

Our current health care system is fragmented, expensive (individually and at the government level), and inequitable. What’s worse, for all the money we spend, the system fails us too many of us, too often.

A 2018 Massachusetts Health Reform Survey found that 49 percent of adults in Massachusetts had difficulty obtaining care in the past year. Those worse off were of moderate income, where 48 percent reported problems affording their care.

Despite spending so much more compared to every other country, our national health outcomes frankly are abysmal. A carefully controlled 2017 comparison of health outcomes in 11 wealthy countries like Australia, Sweden, and France found that the U.S. has the worst outcomes of all in areas like infant mortality, preventable deaths, and disease-specific survival rates.

What’s more, this disparity in outcomes grows when examined across racially and ethnically diverse communities. For each state, the federal Agency for Healthcare Research and Quality tracks dozens of health quality measures. In Massachusetts, the disparities are stark. The data show that care for white people exceeds or is near the benchmark goal on 71 percent of the measures. For black people it’s 25 percent, and for those who identify as Hispanic, it’s just 17 percent.

This inequity is intolerable. It’s a stain on our current health care system, and a key reason why I support change.

We need a system where everyone is treated the same — with universal coverage, including mental health, dental care, vision, long-term care, and more. We need health care considered and financed as a human right and common good, rather than purchased individually as a commodity.

And here let me shout out to Sameen Ansari and Olivia Sonderman, Harvard School of Public Health fellows on my team who have dug in mightily in the work to frame Medicare For All, Single Payer, as a public health imperative. Which it is.

Such a massive transformation will require careful planning and there are plenty of improvements we can make along the way — like the prescription drug cost control bill propelled by Senator Cindy Friedman, which the Senate passed last November. This bill, for the first time, would impose state oversight over commercial drug prices and limit insulin copays to just $25 a month. Both measures are big leaps forward. 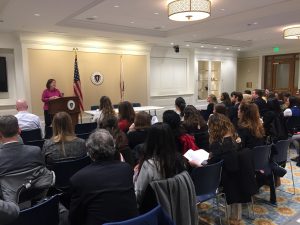 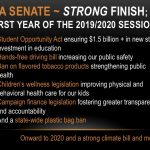 The last formal session of 2019The People's Blog 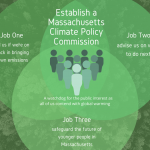