Greetings from your State House!

This post is packed with important updates and a call to action.

On May 23, after four days of deliberations, the Massachusetts Senate passed a $42.8 billion budget for Fiscal Year 2020. This is a 3.2% increase over the FY 2019 budget. The budget now moves to a conference committee which will reconcile the House and Senate budgets.

(Scroll down for the names and contact information so you can raise your thoughts with those charged with this final and critical budget step. Beyond that, you’ll be able to find a summary of the budget process.)

My team and I worked late into the night during Senate budget week to make headway on the 34 budget amendments I filed. We secured some big wins for our district and our region totaling about $1.5 million in direct spending distributed across the following amendments:

Our team also worked to bump up funding for important statewide programs including proposing and winning an additional $500,000 for Department of Public Health Youth at Risk grants, which are distributed to organizations like Brick House in Turners Falls that operate programs related to substance abuse, bullying, suicide, or act as safe havens for LGBTQ young people. Some of my other state-wide focuses included: regional school transportation, rural school aid, and emergency food assistance.

And a constant theme in my floor speeches, including one I gave on public higher education, was the imperative of regional equity.

Additionally, I worked to secure two outside sections, or policies, in the Senate budget. One outside section I created instructs the Department of Transportation to study the feasibility of passenger rail from North Adams to Greenfield to Boston. The study will begin on June 1, 2020 and will look at the costs and economic opportunities related to establishing this passenger rail service.

I also worked with Senator Adam Hinds on a successful amendment to create a commission to study the new (and I think unfair) valuation and distribution of payments in lieu of taxes (PILOT) to municipalities for state owned land. I’ve heard alarm bells from towns like Warwick, where more than half the land is state-owned and untaxed.

I fought hard to insert a hold harmless provision into the PILOT formula, so that no town would receive less than it did the prior year, but—unable to win that—I pivoted to help secure the creation of this commission. The commission, which I hope to have a role in, will evaluate the effectiveness and regional equity of the formula, consider the extent to which the formula reflects the needs of municipalities and the proportional distribution of payments, and then make recommendations to the legislature to establish an updated formula that considers the current needs of municipalities by March 2020.

There were other wins in the budget, as well as other places, like Regional Transit Authorities (RTA) and higher ed funding, where there’s a great deal of room to grow.

I joined three Senate colleagues in submitting revenue amendments to lay down a marker for the kind of progressive revenue advances I’ll fight for this fall. Submitting the amendment allowed me to speak in democratic caucus and on the floor about the corrosive impact of austerity budgeting and the many ‘low hanging’ fair revenue options available to the Legislature, in addition to the Fair Share Amendment, which I also support.

The Senate budget makes a significant down payment on the work of the Foundation Budget Review Commission (FBRC), and funds Chapter 70 at its highest level of $5.176B, an increase of $268.4M over FY 2019. I’m heartened by this gain, but sobered by how far we still need to go. Here’s a rundown of some additional Pre-K to 12 education-related funding:

Thanks to the hundreds of constituents who reached out to urge my support on critical initiatives. Proud to fight for your ideas and interests on Beacon Hill.

And the fight continues into the Conference Committee. Here are the members and their contact information. Don’t wait to make your voice heard!

The FY20 budget process actually began in December of 2018, when the Department of Revenue provides the legislature with a something called a Consensus Revenue Report, which is an estimation of how much tax revenue the state expects to take in for the upcoming fiscal year. 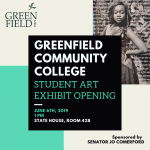 Cheers for GCC art in the State House!The People's Blog 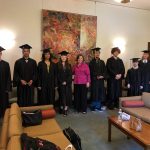