Last week, the Massachusetts Legislature passed two bills — a sweeping piece of legislation to tackle climate change and one laser-focused on economic recovery.

These bills have more in common than simply being passed in the same week. They’re important policy initiatives that address our shared future. Both spur a just recovery from the COVID crisis. Both move us forward.

The omnibus climate change legislation, passed three times each by the House and Senate, is now on the governor’s desk for his signature. After vetoing earlier incarnations, Gov. Charlie Baker is expected to finally sign this one. Here are some of the policy choices in this bill:

The bill requires a 50% reduction of carbon emissions from 1990 levels by 2030, based on specific plans mandated in the law. The bill also sets up sub-limits to track progress toward this goal.

Environmental justice populations and principles are codified within the legislation, which address the unique challenges of low-income, immigrant and communities of color.

The bill places a five-year moratorium on biomass being considered a non-carbon emitting resource. Many constituents spoke up in support of this provision and your voices made a difference.

It requires the Department of Public Utilities to include climate change impacts in its regulatory considerations for the first time.

To speed up the transition to green energy, the legislation invests in both wind and solar energy, increases the renewable portfolio standard (the amount energy electricity suppliers must generate from green resources), and foregrounds work on the rising generation to develop a clean energy workforce.

Finally, the bill requires the development of a stretch energy code that requires net zero buildings. This provision started with a bylaw in Amherst and a long meeting I had with Amherst advocates. Then it became a bill that I filed. Then it was incorporated into this bill, and became a major sticking point with the governor — and now it will become law. Thanks to incredible constituent advocacy and organizing all along the way.

The climate bill passed last Monday. On Thursday we passed legislation that invests upwards of $350 million in state funding for workers and employers recovering from the COVID pandemic and economic crisis.

As federal American Rescue Plan funds arrive in state coffers, the legislature began work to ensure that these funds reach people and businesses that need them most. Here are some of the policy choices in this bill:

The bill establishes a state COVID-19 Emergency Paid Sick Leave fund for employees who are forced to miss work due to personal illness, care for a loved one, or any kind of reaction to the COVID-19 vaccine. This is protection that our workforce has greatly needed. So many of you underscored this as a priority, I was glad to fight for it in your name.

It also helps people who have received unemployment benefits and have a household income of less than 200% of the federal poverty level by excluding over $10,000 in unemployment benefits from their taxable income on state taxes. (If you’ve already filed your taxes and you would qualify for this relief, please contact our office for information about how you should proceed, at jo.comerford@masenate.gov.)

The legislation leans in to support businesses and nonprofits. Businesses that received a federal PPP loan (which had to be spent to retain their workforce) were slated to incur state taxes on the PPP funds they received as well as incur a major hike in their required contribution to the state’s unemployment trust fund due to the unprecedented payments made from that trust fund this past year. This bill addresses both of these issues. It authorizes the state to bond or borrow to spread out the immediate financial burden of recapitalizing our depleted unemployment system, while also bringing state taxation of PPP funds in line with the federal tax treatment, to prevent these businesses from having to pay a tax bill levied on their federal grant.

Tax Day is moved back to May 17 to align with a federal change.

And the bill requires the Department of Revenue to conduct a campaign to raise awareness about the unemployment insurance tax relief program to ensure that people receive notification in multiple languages and through multiple channels. There is also a commission to examine and report on the long-term solvency of the unemployment trust fund.

As the Green New Deal-inspired climate bill becomes law, it will transition us away from a reliance on fossil fuels and stimulate long-term growth throughout the clean energy sector, and we’ll look ahead together to 2030, 2045, 2050 imagining a better future. And the legislation targeting our workforce and businesses says that the future begins now, with an equitable recovery.

P.S. Speaking about what’s needed now for an equitable recovery, please let me shout out to Congressman Jim McGovern and Senators Elizabeth Warren and Ed Markey for the American Rescue Plan, a bold, $1.9 trillion blueprint and policy path forward. In addition to funds coming into the Massachusetts coffers, this legislation will drive millions directly to cities and towns. In Hampshire County that translates into $61.3 million for 20 communities and in Franklin County it’s $20.5 million for 26 communities. 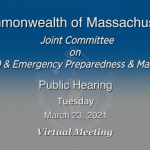