DEAR JO: I just drove my husband to the train in Fitchburg for his daily commute into Boston. Northern tier rail in Massachusetts would be a game-changer for our family. If we are sharing a car, getting him to Fitchburg means I will make two roundtrips today and will spend almost four hours in the car. That time would be cut in half if he got on the train in Greenfield or Orange or Athol. Franklin County is mostly forgotten by Boston, and yet we send them our water. My town’s property taxes are the second-highest in the state in part because a full third of our land is used for Quabbin watershed and is un-taxable and cannot be developed along the major thoroughfare (Route 202). This both protects us and hobbles us. We give a lot to Boston, Boston could give back with commuter rail access.

DEAR DINA: Your email raises a number of important issues, from rail transit to regional equity to the issue of payments to towns like Shutesbury, which steward state-owned land.

I’ll start with rail transit along Route 2. This is something I have heard a great deal for months.

All the way back in 1875, passenger rail service connected Franklin County with both Boston and New York along Route 2. Since that time, service along that route was cut, reinstated and cut again until it was discontinued in the 1960s. Currently, the MBTA runs commuter rail only to Fitchburg along Route 2. The rail track continues through to Greenfield and North Adams, but is only used for freight.

In January, I filed legislation to study the feasibility of restarting passenger rail along the northern tier to North Adams. I was grateful to have the co-sponsorship of Sens. Adam Hinds and Reps. Natalie Blais and Mindy Domb.

I then worked to secure an early committee hearing, and constituents like you provided the testimony: Over 700 people emailed, wrote on Facebook or showed up at the hearing!

The message we brought together to the State House is that Route 2 rail is not just a transportation solution. It’s a matter of regional equity. It’s a climate change necessity. It’s an economic development win. And it can help solve Boston’s congestion problem and housing shortage — all at the same time.

The promise of revitalized rail travel is sweeping our region. A study of east-west rail from Boston to Pittsfield, championed by Sen. Eric Lesser, was just released, and it proposed multiple exciting options. Sen. Adam Hinds is leading a rail pilot in the Berkshires that kicks off this year. And, of course, the Connecticut River Valley is eagerly awaiting the Valley Flier north-south rail, which essentially triples service to Connecticut and New York, allowing for the possibility of same-day, round-trip travel.

And while rail service is one important part of regional equity, Dina, you rightly note that Shutesbury and the entire Quabbin Region stewards Boston’s drinking water. Additionally, the four counties in western Massachusetts are home to thousands of acres of state-owned forests. In addition to providing ample recreational opportunities, these forests sequester carbon dioxide, making them essential partners in the work to fight climate change.

The cities and towns that hold state-owned land perform a crucial service for the state, and so the state makes payments to compensate these municipalities for the tax revenue that they would otherwise collect on the land. These are called PILOT payments, for “payments in lieu of taxes.” The bad news is that the formula for compensating cities and towns changed in 2017 to one that disproportionately burdens western Massachusetts.

To me, this is the blistering antithesis of regional equity.

During this year’s budget debate, I filed an amendment that would have held these towns harmless, meaning they wouldn’t lose money. But I wasn’t able to get that through the budget process. So Sen. Hinds and I filed an amendment based on a bill he sponsored to form a commission to look at fairly revaluing the PILOT land payment formula with an eye toward regional equity and the climate crisis.

Sen. Hinds and I succeeded in getting our amendment into the Senate budget, but it didn’t make it through the Conference Committee, which consolidated the House and Senate budgets.

So my team and I will retrench and push this regional equity issue forward in other ways until we prevail. That kind of pivoting and recalibrating happens daily, or hourly on some days.

You’re right, Dina, western Massachusetts gives a lot to Boston in the form of potable water, open space, food from our region’s farms, ideas and innovation from this knowledge corridor, and more.

Boston needs to give back. 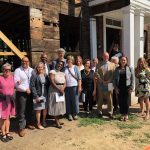