I offered this reflection at the UMass Amherst School of Public Policy kick off on September 1, 2022.

Thank you to the School of Public Policy for inviting me to speak with you today. I’m honored to join Samantha Hamilton. Samantha, thank you so much for your powerful work. The Public Health Institute of Western Massachusetts was essential before COVID, and remains a health equity beacon today.

My team and I are closing in on the end of our second session in office. Four years of scrum – a Rugby analogy to which I really have no right – arms locked, heads down, lots of mud (I’ll come back to “mud” in the end) – fighting to pass good and just policy for the people of the Commonwealth.

Policy is simply an idea. A blueprint for change.

It’s thrilling, humbling work. And it takes every instinct, every skill I’ve learned over many years to do well.

Passing policy is all about teamwork. Relationships. It’s also about winning.

In the next few minutes, I’m going to do a lightning round of how my team and I move the proverbial policy ball on behalf of our district, by sharing nine lessons.

#1: Sometimes ideas spark. Be ready. We think of government as churning slowly, but sometimes it flies. One of the first bills we filed was one to study a restart of passenger rail service along the Route 2 corridor, the state’s northern border. We thought it would be a long-shot, but the transportation chairs were interested, the bill testimony was strong, and a path forward opened. Policymakers have to fan sparks into flames and you just don’t know when you’ll need that fan, so have it handy.

#2: “No” means “not now.” There are too many examples to count where “no” was the first response to a later successful policy idea. In 2019, We filed a bill to develop a “net zero building code” to limit carbon pollution from buildings. At the beginning of that legislative session, a net zero code seemed inconceivable to the powers that be on Beacon Hill. In fact, more than one person laughed at the audacity of this idea. Fast forward 18 months or so, and no one was laughing any more. Stellar climate advocates had pushed us to move the state to net zero by 2050 and that building code was a central stop on the journey to get there.

This brings me to #3: Expertise matters. In my first session, I was all about net zero building. In this second session, we’ve gone deeper into complex, gritty solar and electric grid policy thanks to truly gifted researchers and advocates. Policymakers like me have to rely on trusted allies like you to help craft policy solutions that will actually work. I’m a generalist. I don’t want to be the smartest person in the room. But I want the smartest people in the room to help lead the bills we file.

So expertise matters. You know what else matters? #4: Public input. Because there’s no such thing as one-size-fits-all policy. Policy can’t be crafted in a vacuum. It needs razor sharp expertise and it needs to be seasoned by the very folks who will have to implement it or be affected by it. Here’s a concrete example: Voting reform is very popular in our region, but the original statewide bill up for consideration this session left western Mass behind in a lot of ways. For example, the policy as written included helpful provisions for counting early ballots submitted in electronic tabulators, but did not include the wooden crank boxes used by many of our communities here at home. It was a relatively simple fix, but one that wouldn’t have necessarily been seen or called for without constituents’ calls to action.

#5: People power matters. A group of formerly incarcerated women and their families have been organizing to support alternatives to jails and prisons. They have envisioned new ways to remake our criminal justice system and invest in communities that suffer under highest rates of policing and incarceration, underemployment, gentrification, and environmental racism. Their uphill battle grew stronger and stronger as they built a coalition that included religious groups, civil rights organizations, community groups, and many, many others. In the end, against all odds, the House and Senate passed a bill we filed to put a 5-year moratorium on new prison construction in Massachusetts. Now, the Governor vetoed that provision, so it’s not law. But this is a story of how people power, wielded with passion and skill, can achieve results.

But sometimes we’re not fully successful and that’s when we have to be ready for #6: Partial victories are still victories. With the incredible Rep. Mindy Domb and in partnership with very smart subject matter experts, we filed a “green and healthy schools” bill, part of which was recently signed into law within this session’s larger climate bill. You’ll notice I said “part of which” because the full bill as written didn’t make it through. The bill as written had three parts: get the data needed to understand the state of climate preparedness and public health protections in existing schools, to use the data to formulate new standards, and then to assemble a group of people to advise the state on how to make green and healthy schools a reality. We saw an opening and got the first two provisions into the climate bill. We’ll come back this session for the third piece of this work. Could I have taken an all or nothing approach? You bet. But then I’d have nothing.

Which brings me to #7: Sometimes we get nothing. Setbacks are real. And it’s not about having thick skin. Policy work needs us to have internal organs sturdy and strong enough to withstand body blows of defeat. You may have heard about the end of this year’s formal session and the economic development bill that stalled out – the fate of which is still unknown. That omnibus bill had within it three bills that my team had led on, and millions for our district. It was a thing of true beauty. A policy miracle of sorts. And my team and I couldn’t do anything to save it from running aground. All we can do now is support excellent colleagues in continued negotiations, recognizing that the loss we feel as legislators is nothing compared to that felt by the people and communities who desperately need the money and relief these policy changes would bring.

#8 is really important for Legislators and advocates alike: It’s not enough to pass a good bill. You have to see it through. Passing a piece of policy in the Legislature feels really good, but there’s absolutely no guarantee that (a) the entity charged with implementation will actually take up the work, or do it as prescribed, or (b) that the policy itself will work as envisioned, without any unintended consequences. I believe policy makers must continue to be accountable to the legislation they design as it moves forward on its journey – and be ready to jump in again should help be warranted.

And lastly #9: Utilize the policy power in government at whatever level of government you’re in. When the Supreme Court gutted Roe v. Wade, and amid attacks on reproductive equity and gender affirming care coast to coast, policy makers on Beacon Hill came forward to create a line of defense for the people of Massachusetts. Government can and should work in the best interest of all. We can and should move policy like lightning when lives are on the line. It’s all about the will of the people inside of government and in the streets.

I’ll close with a passage from Marge Piercy’s poem, To Be of Use – here’s where the mud comes in:

I love people who harness themselves, an ox to a heavy cart,

who strain in the mud and the muck to move things forward,

who do what has to be done, again and again.

The work of the world is common as mud.

Botched, it smears the hands, crumbles to dust.

But the thing worth doing well done

has a shape that satisfies, clean and evident.

The pitcher cries for water to carry

and a person for work that is real.

You are the people Marge Piercy is writing about. You’re looking for real work.

You’ll pull policy forward in the muck and mud with massive patience and you’ll do it well.

I know your work and the work of this program will have shape. And it will transform communities and change lives. 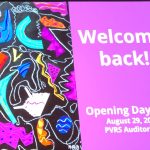 A ‘back to school’ love letterThe People's Blog 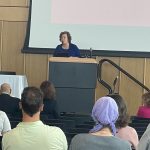 Breaking Down the Silos: Nursing Meets EngineeringUpdates from Jo, The People's Blog