Dear all, perhaps this is the last time I’ll break from this column’s tradition of answering just one constituent’s question. These last months have been a time of intense community focus — first on COVID-19 and now the horrors of racial injustice. While not in any way new, these horrors have been intensely evident over the last weeks.

To answer just one question would be dishonest in the face of hundreds of constituents asking what can we do? What will the state do?

What will I do? And though the emails don’t say it, I feel it, and I add on my own — what I will do as a white woman to address acts of white supremacy terror?

To respond to Ahmaud Arbery, who was out for a run in Georgia when he was murdered. To Breonna Taylor, who was shot six times by the police in the middle of the night in her own home. To George Floyd, who was choked to death by a police officer outside a Minnesota grocery store and heard to say “I’m going to die” before losing consciousness.

To the infinite list of horrors. A list, past and present which grows by the day before we’ve fully mourned the last violent killing.

As an individual, I can and do commit now to not losing hold of the urgency of this brutal moment. Refusing to accept any half measure actions. Committing to listen deeply to black, indigenous and people of color colleagues. Understanding that listening is not enough. It must be followed by concrete, decisive, accountable action.

As your state senator, I can link arms with Black and Latino Caucus colleagues who have proposed four immediate and important state legislative actions as part of a larger 10-point plan:

And there’s much more.

Racism is a public education issue. Even in the face of budget stress, we must fully fund the Student Opportunity Act, passed into law last year with the mandate of closing the glaring gaps in educational opportunity across race and class lines. Because the quality of a child’s education in Massachusetts must no longer be determined by their zip code.

Racism is a public health issue. As we emerge from COVID-19, we must acknowledge that in part because of aching health disparities and disproportionate rates of pre-existing conditions, because of the debilitating and compounding effects of environmental racism, communities of color have been much harder-hit by the virus.

And we must act swiftly to remedy these glaring disparities by making health equity foundational to all commonwealth decisions. An Act Advancing Health Equity directs all state agencies would force the state to evaluate every single major decision on the basis of whether it helps close or exacerbates racial inequity gaps.

Racism is an employment and worker justice issue.

People of color, including many from immigrant communities, have been disproportionately represented in the COVID-19 essential workforce. We must create worker protections that value the essential nature of workers, like passing An Act Relative to Work and Family Mobility, which would provide access to drivers’ licenses and thus access to car insurance for all. Essential workers also deserve publicly-funded hazard pay, sick time, universal health care.

Racism is an issue that’s at the heart of commonwealth prisons. In the commonwealth, black people are 7.5 times more likely to be incarcerated than white people, even though black people represent just 8.9% of the overall population and white people 80%. We must immediately reverse continued spending hikes. We must end the disproportionate incarceration of people of color.

The above actions called for by the Black and Latino Legislative Caucus will lay a powerful foundation for this work. And sheriffs like Bristol County’s Thomas Hodgson, who is under investigation by the attorney general and Senate Post Audit and Oversight Committee for his violent and racist acts, must be ousted. Racism is embedded in our state’s seal and motto.

Transforming generations of racial oppression in the commonwealth requires more than a single act. It demands a forceful agenda grounded in equity and inclusion.

My personal list of imperatives could fill multiple columns. They make my thinking laser focused. Make my heartbeat faster. Steel my resolve.

Read this article at the Daily Hampshire Gazette. 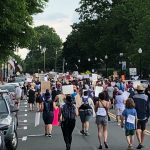 Breaking the silence: Words are not enoughThe People's Blog, Updates from Jo